Wonderful memories from a wonderful series

A packed Croke Park. Supporters from Kildare and Meath urging every last ounce of effort from their players. The players responding  – and then digging deeper to pull out something that even they didn’t know was in them.

Magical times, and 20 years on the memories of the trilogy are still enough to make the hair on the back of Eddie McCormack’s neck stand on end. 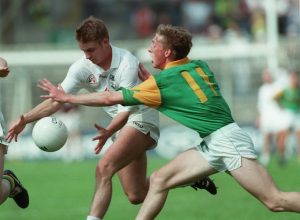 Eddie McCormack of KIldare is tackled by Meath’s Trevor Giles during the second game of the trilogy
Photo: James Meehan/INPHO

“What comes to mind really was the atmosphere in Croke Park for those games, it was electric. Nobody knew at the time that it was going to go to three games but in the end, one game was better than the other. The sheer physicality and speed of those games, they probably did get the credit they deserved but they were fantastic matches. They could have went either way in the end but unfortunately it went Meath’s way but we learned an awful lot from that, we built on that going into ’98,” said McCormack, the stylish wing forward on the Kildare team.

“They were tough games, open games, two teams wanting to win. They were very open games with lots of scores and defensively it wasn’t like it is today but definitely physically and fitness wise it was just as good,” added the Clane clubman.

It’s hard to look back now and imagine that a side containing Davy Dalton, Glenn Ryan, Sos Dowling and Willie McCreery, to mention just a few, would have their mentality questioned but at time, Kildare had consistently failed to deliver on the talent within the squad.

They had displayed a here to unseen mental toughness when overcoming the early sendings off of Martin Lynch and Johnny McDonald to beat Laois in the previous round and the three games against Meath, even though they ended in defeat, showed Kildare’s new found resilience.

“Getting the two boys sent off early that day against Laois was a bit of shock but I think when we stuck it out and once we got over Laois we grew in confidence and there was a huge belief in the team that we could go on and take Meath. Even after drawing the first game we were sure we could win the second game, I know they ended up by beating us by a couple of points in the third game, and that was very disappointing for us, but we definitely grew in confidence for ’98.

“We were probably accused of not winning games that we should have at the time, and that probably was a bit of an issue. Especially in the second game, they brought on a man who played out of his skin and kicked four points. It was disappointing to lose in the end because we did have chances to win it. We knew what Meath were like at the time, they were relentless and probably the hardest team in the country to beat. If you didn’t take your chances when you got them they were always going to come back and have their own period. They did have their periods in the three games but we had our periods too and stuck at it quite well, even the third game went down to the wire as well and could have went either way.

“People always harp on to me about ’98, and ’98 was a huge year for us, but for me those three games against Meath and the game against Laois in the round before will always stand out in my mind,” said McCormack.

Kildare were the underdogs against the All-Ireland champions but the fact that they could now stand toe to toe with the best in the country was a huge moment for a young team.

“They had huge players, Darren Fay, Graham Geragthy, Trevor Giles, Tommy Dowd, Colm Coyle. All these boys who had won an All-Ireland the year before and were well seasoned players. I was coming in on the back of two years with Kildare at that stage, after getting a hiding in the first round in ’96. Kildare did have experience with people like Glenn Ryan, Anthony Rainbow, Christy Byrne but they were more experienced than us at the time and that’s why we had to stand up and be counted in those matches, we had to turn from boys to men in those games and Mick O’Dwyer helped us do that,” he said. 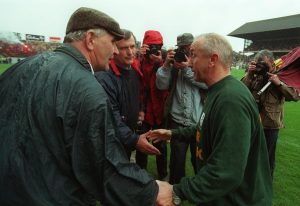 Even with the immense physical toll that the three games in quick succession had taken on the bodies, McCormack can’t remember feeling tired during the series and instead, relished the chance to perform once again in front of a full Croke Park.

“It wasn’t that tough to recover because it was so exciting to be going back again to play these games…the atmosphere in Kildare and the coverage it was creating was fantastic. It was just about keeping yourself right during the week, we didn’t train overly hard, it was just about getting any injuries right, getting yourself mentally right and it was just a joy to go back to Croke Park and play in front of a packed house again,” said McCormack.

The series ended on a sour note for McCormack when he missed a penalty early in the second half of the third game. It wasn’t the losing or winning of the game but it was something that haunted him for some time.

“It did bother me for a while. We were practising penalties in training and I’d say I was scoring 18 out of 20 penalties against Christy Byrne, which was a feat in itself. I was hitting them really sweet and was the designated penalty taker that day. I had picked my spot, to go low to the ‘keeper’s left and it actually went high over the bar. I didn’t connect with it right but look it, if we’d won nobody would have been thinking about the penalty. It’s one of those things in football and you just have to get on with it but it did bother for a while at the time alright. The goals get smaller in Croke Park when you put the ball down to take a penalty and there’s 50,000 people screaming at you but I didn’t shrink from the challenge, I wanted to take the penalty, I was confident taking the penalty, I just hit it too high,” said McCormack.

He is expecting Meath to pose a stiff challenge for Kildare on Saturday but feels that his home county have the edge.

“They are two teams who have improved considerably since last year and at the moment Kildare and Meath are the only teams in Leinster who can give Dublin some kind of game. Kildare do need to win this game and to get back to a Leinster final, it’s a long time now since the last one.

“Kildare need to get their match ups right on the day. Meath do have players that could trouble us. Cian O’Sullivan has serious pace, Graham Reilly is there too and they have a couple of other boys well capable of knocking over scores. They are very good going forward. If we get it tactically right, we’ll beat them,” said McCormack.