Feely free to play against Armagh

KEVIN Feely has been cleared to play for Kildare in their Round 4B Qualifier against Armagh at Croke Park on 29 July – even though his appeal against the black card he was shown in last Sunday’s Leinster Final was rejected. 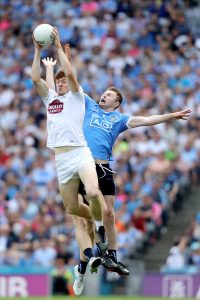 Kevin Feely is free to play for Kildare against Armagh
Photo: ©INPHO/Oisin Keniry

Kildare could only appeal any of the three black cards shown to Feely this year once he was shown the third and his suspension kicked in and they decided to appeal against two of them.

The Athy club man was also shown black cards in the league this season against Cork and Clare, and it the card shown against Clare in Newbridge on 26 March that has been rescinded.

There are further avenues of appeal available to Feely and Kildare for the black card shown against Dublin, and they may be worth pursuing because as it stands a black card against Armagh would rule him out of a potential All-Ireland quarter-final, but it is not yet clear whether they intend to go down that route.

The news that their vice captain is available is a huge boost for Kildare especially as they are already likely to be without captain Eoin Doyle for the Armagh clash. The Naas man played against Dublin with a broken thumb and had surgery on it the next day. He is now rated as extremely doubtful for Kildare’s next game.