A TIME FILLED WITH WHAT IFS

KILDARE supporters won’t need any introduction to the man in the opposing dug out on Saturday night and the majority of the Kildare panel won’t need one either. 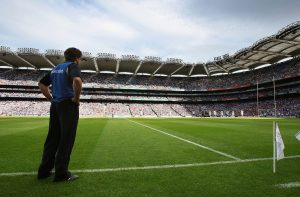 Kieran McGeeney looks on as Dublin are awarded a free kick during the final moments of the 2011 Leinster semi-final. It was the kind of bad luck that dogged his tenure in Kildare
Photo: ©INPHO/Cathal Noonan

During his six years in Kildare, Kieran McGeeney handed Championship debuts to 12 of the current squad. He was also the manager when Kildare won the Leinster U21 title in 2013 with a team that now forms the backbone of the current senior side.

It would be impossible to look ahead to Saturday’s game against an Armagh side managed by McGeeney going up against Kildare for the first time without looking back on his time in the county.

He is somebody who still evokes strong emotions in many people around the county. His blunt honesty was too much for many to handle while in other quarters the Seanie Johnston affair certainly tarnished his reputation. There are even those that say the lack of silverware, apart from a Division 2 title in 2012, meant that McGeeney’s time in Kildare wasn’t a success.

But that surely overlooks what McGeeney did. Throughout the history of Kildare GAA, there have not been many periods when Kildare had a team to match anybody in the country but during McGeeney’s time, especially from 2009-2011, Kildare were as good as anything around. It is said that you get what you deserve in sport, and McGeeney would have been the first to say you have to earn anything you get, but it’s hard to feel that way about that Kildare team. Put simply, they didn’t get what they deserved.

Looking back, only an almost ludicrous list of bad luck and bad refereeing decisions at crucial times in crucial games stopped Kildare from lifting major silverware. So, instead of a handful the medals the players involved from that time are left only with regrets, albeit with memories of a special time.

“Just after he was appointed I met Dessie Farrell and he told me that Kieran was the most professional guy that he had ever come across in any of his time. So that sort of got me a bit excited,” said Doyle.

“I remember the first night we met and all the players were together. He painted a picture of what the outside world thought of us and it was probably hard to take. He was brutally honest and from there on I liked him because of that, there was no beating around the bush with him, no bullshit, just straight up raw honesty. Sometimes that doesn’t suit everybody but it certainly suited me. Sometimes it was hard to take but you appreciated it. You could argue it out with him if you were willing to go down that line but you normally lost so you learned fairly quick that there was no point going toe to toe with him,” laughed Doyle.

McGeeney was known to be demanding but he didn’t ask anything of the junior members of the squad that he wouldn’t ask of the senior members, if anything he was harder on the more experienced players.

“At that time myself, Dermot, Roli, Anthony was still around, and he would have been hardest on us. I remember having a conversation late one night with Dermot and Roli and the conversation was along the lines that he was always getting on to us. A little bit of bitching as goes on when sitting late at night with one or two too many drinks. It was sitting on my mind then so I said it to him one day, ‘you’re always having a go at the older lads’. So he said to me ‘look, if I’m seen to push my main men, my leaders, the rest of them will come with them but if I’m soft on ye then the rest won’t go’. It was a fair point and something I never thought of. He always had a reason for everything he did, he just thought about the game differently,” said Doyle.

One of the perceptions at the time was that McGeeney was effectively bankrupting the county in the search for glory but that has never gone down well with Doyle.

“I’d often slag him and tell him that the only ones glad to see the back of him were the Arabs that were supposed to be paying his wages. There’s a perception out there, even today, just because of the professionalism he brought that he bankrupted Kildare which is just nonsense, it’s just lies and it doesn’t sit well,” he said.

Somebody involved in one of most controversial on pitch moments during McGeeney’s time was corner back Aindriú MacLochlainn. He was harshly adjudged to have fouled Bernard Brogan in the dying seconds of the 2011 Leinster semi-final, a game Kildare lost to Dublin by a single point.

“Within his time we definitely should have achieved more. We had a National League and a couple of O’Byrne Cup but I feel in 2011 that was very unfair and disheartening. It was a free that was never a free at the end of the Leinster semi-final. I feel if that game went to a replay we would have had the motivation as the team who got the late equaliser to go and win that game, we had no fear of Dublin. It was a two horse race, no disrespect to Wexford but I think if we had got over Dublin we would have won Leinster. That could have catapulted Kildare forward and galvanised everybody in the county. Dublin went to win an All-Ireland that year, it could have been us,” said MacLochlainn.

“Donegal beat us that year too, I thought we should have won that in normal time, it was a great tactical battle between the two managers. I thought we were by far the two fittest teams in the country that year. I found that very hard to take, I thought we were the better team and I think we would have been better prepared to push forward, and then they went on and won an All-Ireland the following year,” said MacLochlainn.

“In 2010 against Down, Smithy scored a point that wasn’t given, there was no Hawkeye at the time and for the goal, Benny Coulter was nearly on the endline for that goal, it was so obvious. I think if we had Dermot there that year we could really have pushed on, we had Aidan O’Rourke involved as well, he was brilliant. We played Cork so often in challenge games that year and I think we would have beaten them. There’s very small things that went against, it could have been a Leinster and an All-Ireland or two and that means different things as well, like All-Stars for lads and things like that,” said MacLochlainn.

So his time never did get the defining moment that was so deserved but MacLochlainn says that they achieved something intangible.

“We were extremely competitive, no team wanted to play us during that period. People knew what type of man Kieran was on and off the field and they knew the type of player he was going to pick. We were extremely fit, extremely strong, extremely mentally tough. We had one of the meanest defences in the country, and I mean that as a team, not just the six backs. Teams had to work so hard to get goals off us and even long range points, and we still had one of the top scoring forward lines. I’d love to have the silverware to prove all that,” said MacLochlainn.

It’s a feeling echoed by Doyle.

“We pushed very hard and it’s one of my biggest personal regrets, we didn’t land the silverware to make Kieran’s time in Kildare a success. It’s a stick that the outside world use to  beat him up. We didn’t win a Leinster and came close in quarter-finals and semi-finals but we could just never get over the line, bar the Division 2 title against Tyrone. That’s a regret because I think he deserved that but you don’t always get what you deserve,” said Doyle. 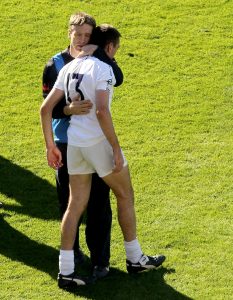 McGeeney consoles Johnny Doyle at the final whistle of one of the many heartbreaking defeats during his tenure, this time after the 2010 All-Ireland semi-final
Photo: ©INPHO/James Crombie

A time filled with regret but also a time filled with special memories for those closely involved but time moves on and even those in the county who cherished that era will be hoping for Kildare to get over Armagh on Saturday.

MacLochlainn is wary of a side who have rebuilt their confidence through the Qualifiers.

“Getting over Tipp was a massive thing for them. They had a massive score to settle there after losing to them in the league. Then Kieran got a lot of heat after their performances against Down in Ulster so they had a lot of questions to answer. I was delighted for them to beat Tipperary but when the draw was made I was concerned because they are coming away from a massive win. That’s going to galvanise them and galvanise Kieran. We had a moral victory in some ways and we had a good enough performance in some areas but we are still coming off a defeat. We will be without our captain but the one saving grace is that it is in Croke Park, I think that suits us and I think we will edge it. I think they are more battle hardened and experienced, that’s our biggest weakest link, our naivety, that’s how we gave up the two goals against Dublin. You can’t buy that, you have to get it by going through these situations,” he said.

By chance Doyle met McGeeney outside Croke Park on the way into the recent Leinster Final and he knows that his former manager has been under pressure in his home county but a win over Kildare and a place in the quarter-finals would help alleviate a lot of that.

“Whether it’s club or county, nobody is harder on you than your own. It’s a tough one, he’s had a couple of rough years but going into the Kildare match he’ll be looking to go into a quarter-final and that would take a bit of pressure off him. He’s under pressure, no doubt but he knows that himself. Not getting out of Division 3 put a bit of pressure on him but he’s building a team and he needs time. In fairness to the county board there, they have given him time and he’s done a lot of work trying to set up things underage. He’s got good people with him and it’s long term thing. County boards and clubs will want to see results though, no different to himself. In one way I’m sure he’s relishing the Kildare game, in another way maybe not because he would have brought a lot of that team through. He’d still have great time for them and I’m sure they have great time for him too.”