Ireland move confidently into the quarter-finals

IRELAND continued their winning ways at the FIBA U18 European Championships this evening with a 63-49 win over Great Britain in front of a packed National Basketball Arena in Tallaght. 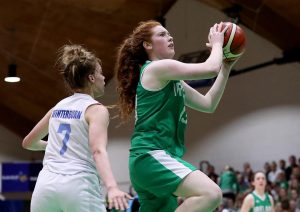 The result means the team have won all four games in their group so far and have assured themselves of topping their group, and qualifying for the quarter-finals, with a game still to play.

Once again, Kildare duo Claire Melia and Sorcha Tiernan were at the heart of an excellent all round team performance.

Melia recorded her third double double in four games and finished as the game’s top scorer with 13 points, and also 12 rebounds, six assists and three steals in just over half an hour on the court.

Tiernan meanwhile turned in the type of hard working and determined display that typified the difference between the two teams.

Like Ireland, Great Britain had won their first three games and came into the game with hopes of topping the group but after the scoring the first basket they were ahead for just 12 seconds of the game as they played second fiddle to Tommy O’Mahony’s well drilled team.

Bronagh Power Cassidy and Rachel Huijsdens also turned in top class displays and Ireland can go into Wednesday’s game against Ukraine with no pressure, and look forward to Friday’s quarter-final. 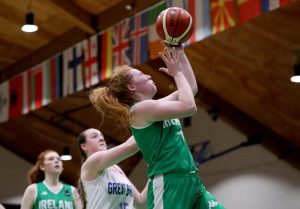 After the game, Sorcha Tiernan was delighted with the result.

“It probably wasn’t our best performance as a team but we got the win and that’s what matters. We’ll regroup and get ready for tomorrow’s game,” said the Courtyard Liffey Celtics player.

Once again, it was team work that got Ireland through the game.

“Everybody plays for each other, we are winning because we are playing as a team and we just want to continue that,” said Tiernan.

It was the big game for the team but it says much about the maturity within their ranks that they just took it their stride and instead of feeling under pressure playing in front of full crowd, they used it to their advantage.

“We approached the game the game the same as any other. The crowd again were fantastic, every time we scored they got behind us, they are our sixth man on the team so we want to thank them all for coming. I’m sure if I was playing against that I’d be intimidated. There was no extra pressure but we always want to get a win over our nearest rivals,” said Tiernan.

Ireland have one group game still to play but will go into that with no pressure having already secured top spot.

“We are looking forward to tomorrow, Ukraine are a good team as well, they only narrowly lost out to Slovakia and Great Britain. We’ll get our preparations done and just play as hard as we can again.

“Playing that many games in a row is tough obviously but we had a rest day yesterday, we’ll give it all we have tomorrow and then we have a rest day on Thursday and we’ll get ready for the quarter-finals then,” said Tiernan.