IT’S been Dennis ‘Hurricane’ Hogan’s dream since a young boy. To become a world champion. At times it felt a million miles when growing up in Kilcullen and fighting his way through the amateur ranks in Ireland. The decision to turn professional and move to Australia brought that dream back into sharp focus and after tearing his way through the ranks, he was on the verge of the world level when he stepped into the ring last November and beat Yao Yi Ma to win the WBO Oriental Super welterweight belt.

But since then, nothing. Until now. 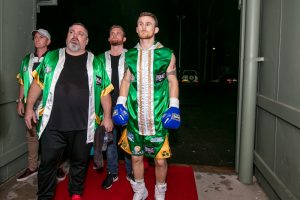 Dennis Hogan is ready to make that walk to the ring again
Photo: Katherine O’Malley

Hogan is firmly established inside the WBO’s top fighters in the world, at number three at the moment, and he will make his comeback against the man currently ranked ninth, Yuki Nonaka, at the Brisbane Convention Centre on 14 October.

Despite the long absence and wait for the right fight, Hogan wasn’t frustrated.

“It’s a very exciting time for me. I’m going to be back in the ring again after not being in the ring since last November. It’s been a while, it’s actually probably longer out of the ring than when I had my injury a few years back. I’m just looking forward to getting back in there and getting the last few months out of my system.

“The time I was out wasn’t frustrating to be honest. It seemed like the end wasn’t in sight there for a while but I didn’t get frustrated, I just came back to myself and got my head down in training. I was enjoying it in a sense because for the last few years it’s just been go, go, go. It’s been good to get back, and take some time to really look at myself, knuckle down on stuff that I really wanted to improve on. When I really started to see those changes in myself, it was actually quite exciting,” he said.

A win for Hogan would almost certainly lead to the fruition of his dream, and a chance to fight for a world title.

“The winner of this fight coming up is definitely getting the number two position. The way things are at the moment, Canelo Alvarez vacated the title and Cotto is fighting number six (Yoshihiro Kamegai), that match will have one winner. The rematch between Liam Smith and Liam Williams will leave one winner so that will leave me back in the number two position. If they fight off together that would leave me in number one mandatory position. If not, whoever wins between Cotto and the number six could choose me next.  We are very close, I can feel it. This next couple of months are going to be exciting and we are going to get that big fight, it’s definitely coming. In my mind I am already the champion. Everything is going to come together to make that a reality. I’ve been putting the work in and it’s about to come to fruition,” said Hogan.

He has been based in the Stretton Club in Brisbane being coaching by Glen Rushton and training with Jeff Horn. Horn recently caused a sensation when he beat Manny Pacquiao to win WBO welterweight title. Hogan got the chance to be part of Horn’s camp in the build up and while he was delighted to play a part in that win, it also gave him the perfect inside into what he needs to do to win his own world title.

“Jeff’s win was phenomenal and it really has been a pleasure to be part of the training camp and to be part of the team while all that was going on. It’s just great to see the energy, the training, the technique, the structure of the training camp, the game plan, that my coach Glen Rushton brings to these type of fights. The belief and confidence is just amazing, there is such an energy in the gym with all this stuff is coming together and there is a real belief now. We know now that we have the ingredients in the gym to beat anybody in the world. There’s just a great vibe and feeling in the gym. It’s just been perfect in terms of that happening and me going forward for my next fight to put me in position for a world title fight. It’s top notch stuff,” said Hogan. 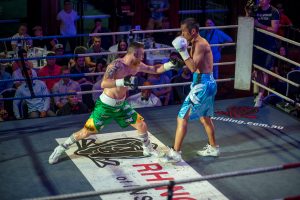 The Kilcullen man, now 32, will become a father for the first time before his fight with his partner Brideen due to have the couple’s first child in three weeks and that all adds to Hogan’s feeling that this is the time for all his wishes to come true.

He will respect his opponent on 14 October but he is hugely confident of getting the result he needs.

“The guy I’m fighting is ranked highly by every single sanctioning body. The IBF have him sixth, I think he is seventh with the WBA so he is well up there. On Boxrec he has a higher ranking than me. It’s all there for me to beat him and grab those rankings. On top of that, he is a southpaw. I’ve had plenty of good  practise with southpaws and I’m very confident of beating them. I know he had trouble with other southpaws so that just means that I just need to focus on leading as a southpaw and changing it up every now and again and start to play a few tricks on him and stuff. I’m going to make it my fight. I’m fit as a fiddle, it’s going to be ten round fight. It’s in my backyard so I will come out gunning for him. I’m going to look to impress the judges and if a stoppage comes along as well it’s only going to be better for me and my career. I’m going to go out there with all guns blazing. I know that when I’m training against southpaws for a southpaw fight, I really start to enjoy that. I really enjoy the double right hands and the sharp right hand leads that southpaws don’t like to receive so I’m really looking forward to this fight,” said Hogan.

The fight will be part of a massive event as Australian boxing is enjoying a surge in popularity following Horn’s title win and there will be plenty of Aussie’s cheering on their adopted countryman as Hogan tries to emulate that win. Fan fights in Ireland will be able to see the fight too as it will be streamed around the world online for free of charge and Hogan is confident that those who tune in will be in for a treat.

“This fight card that I’m on, I’m the main event and there’s about three other fights on the card that are capable of being a main event on their own show. This show is going to be massive. It’s received massive media attention here in Australia but I’m ready. I’ve been working hard with Glen. There’s certain things that he wants to see me improve on to get that finesse of a world champion. He said that he’s seen that and now he’s confident that I can take on anyone in the world. There’s a big rush now towards that world title, and I’ll have it soon,” he said.