THE race to lift the Dermot Bourke Cup is hotting up and this weekend the Joe Mallon Renault Senior Football Championship reaches Round 3. It’s do or die at this stage of the Championship and the four winners will progress to join Athy, Moorefield, Johnstownbridge and Celbridge in the quarter-finals, while for the four losers, their Championship is over. 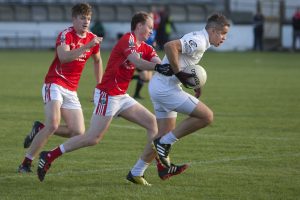 Eoin Naughton’s experience will be needed in a young Clane team when they take on Leixlip in Round 3
Photo : Piotr Kwasnik

Clane did at least have the individual display of Brian McLoughlin to cling to during their 5-12 to 0-10 defeat against Moorefield. He was also the driving force behind their 2-11 to 1-12 first round win over St Laurences and scored a total of 15 points in those two games. Still only 18, he has shown plenty of his potential and is clearly over the injury problems that dogged the latter part of last year for him.

McLoughlin’s shooting could the key to overcoming Leixlip. They arrived in their second game against Moorefield after a tight 2-7 to 1-8 win over Allenwood in the opening round and for the first five minutes really looked like they could make a game of it. That bright opening quickly evaporated and Moorefield had no problem cutting through their defence. They still rely heavily on Paddy Meagher and Eamon Murphy in attack while Tommy Moolick provides a huge physical presence in midfield.

However, McLoughlin is in great form and could prove the difference here.

GIVEN the disjointed nature of the county champions’ performance against Celbridge in Round 2, an extra game before the quarter-finals might be no harm, that is assuming Sarsfields live up to their favourites tag and make it past Castledermot of course.

They looked a side who were missing their leaders against Celbridge and if they were able to include people like Gary White or Sean Campbell it would be a big boost for the John Crofton managed side. Conor Hartley’s unfortunate knee injury means that at least one change will be needed in defence.

Yet, there will be no panic from Sarsfields, after all, two of their three county wins under Crofton have come after losing one of their two opening round games. Of course there are areas where they need to improve but there positives as well. After being eight points down against Celbridge, they came back very strongly in the second half. Seeing Alan Smith firing on all cylinders and kicking four points from play will have given him a huge boost, more will be expected of Ben McCormack and Dan Nea though.

Castledermot took their place in Round 3 by beating Allenwood after a replay. They are a well organised side under the management of Damien Hendy and won’t be found wanting for spirit or determination but that unfortunately only takes you so far and even the best efforts of the likes of the Keating brothers, David and Gavin, and Gavin Farrell are unlikely to cause a shock here. 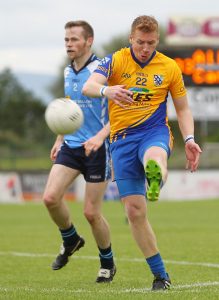 THE tie of the round, and a tough game to call.

It’s hard to know what to make of Naas after their last outing against Johnstownbridge. Being kind to them, it was seven days after a demoralising Division 1 final loss against Moorefield and that may have taken a lot out of them, but even allowing for that they were strangely off colour. The power and athleticism of midfield pair Sean Hurley and Barry McNally was too much for them to handle and they got little joy from their forward line apart from the Joyce brothers, Ronan and John.

If Eoin Doyle was fit to take his place in the team it would be a huge boost as he would add the type of leadership that missing from their last two games. He would also possibly be the man to look after Eoghan O’Flaherty. It not quite as simple as this but generally if a team can stop O’Flaherty then Carbury struggle. Keith Cribbin did a great man marking job on him in the first round and Johnstownbridge ended up with the win, Maynooth couldn’t get to grips with him in the second round and he scored eight of Carbury’s massive 25 point total. If Doyle is again unavailable, Eoghan Bateman could be the man tasked with that job. He is a very capable man marker and could relish the battle.

The feeling is that Declan McCabe’s side are better than they showed against Johnstownbridge and if they produce their best, they should edge through, anything less and O’Flaherty and Carbury are more than able to capitalise.

ROUND Towers made no attempt to hide their delight at their first senior championship win since 2011 when they beat St Laurences last time out. Manager Glenn Ryan said afterwards that you only become a senior side when you win a game in the championship so it will be interesting to see what level of confidence his team can take from that win.

Neil Scanlon is in superb form at the moment in the forward line and there’s plenty of experience and know how around him in Jason O’Brien and Stuart Murphy.

They are definitely capable of making this an awkward game for Davy Burke’s Confey but having said that, Confey still have to start favourites here. They began their Round 2 win over Eadsetown with county man David Slattery on the sideline but it would be a surprise if they didn’t use his pace from the start. Paul Divilly is another pushing for inclusion from the start, and this is a starting 15 that already includes the talents of the likes of Hugh Lynch, Gary Savage and James Gately. Former county goalkeeper Colin Heeney has been a big addition for this year as well between the posts.