NEWBRIDGE rivals Sarsfields and Moorefield have been drawn together once again in the Joe Mallon Motors Renault Senior Football Championship and will meet in the quarter-finals. 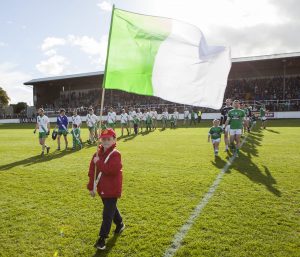 The pre-match parade before Sarsfields beat Moorefield in the 2016 final
Photo : Piotr Kwasnik

The clubs have met in three of the last four finals and have shared the Dermot Bourke Cup between them for the last five years.

The game will have an extra edge, as if any was needed, with Sarsfields chasing that illusive third successive county title. No Kildare club has completed the three in a row since Sarsfields themselves back in the 1950s but on the last two occasions that Moorefield retained a title, their three in a row hopes were ended by their nearest rivals. Now, they have a chance for revenge.

Elsewhere in the draw, Round Towers’ reward for their impressive 3-14 to 1-11 replay win over Confey on Wednesday evening is a tie against Athy. It will be Towers’ first SFC quarter-final tie since 2008 and they will start as underdogs against Athy.

Celbridge are many people’s fancy for the title this year and they were the first name out of the hat and were paired with Naas. The sides met recently in the Division 1 League semi-final when Naas won an exciting game thanks to an injury time goal but both teams will be bolstered by their inter county contingent and the line ups for the last eight tie should be much changed from that last league game.

The last tie, between Johnstownbridge and Clane, will evoke plenty of memories for older supporters of Kildare GAA. Between 1987 and 1998 and the clubs played in a combined 13 finals, Clane (8) and Johnstownbridge (5), and they played each other in the 1989 final. Johnstownbridge are much a team for the now though and they will start as favourites against a very young Clane side.

All four games will take place on Saturday 16 September.