ON Saturday, in the National Stadium in Dublin, Eric Donovan will fight Dai Davies for the BUI Celtic Featherweight title in his fifth professional fight. He spoke with BRENDAN COFFEY to give an insight into what his week will like leading into the biggest professional fight of his career so far. 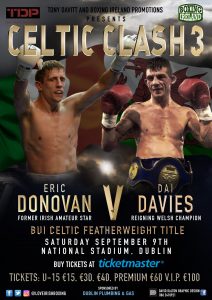 A week before my fight I have my last spar.
This is the last piece of serious work I’ll do before the fight. This
helps to keep me sharp because I’ll be winding down as the fight gets
closer.

Looking back over my training camp, I’m really happy with the work I’ve done: the sparring, the strength and conditioning, the hard runs.
From here on I’ll be focused on making weight and losing the last few pounds that I need to get down to nine stone.

Earlier in the week I recorded an interview with Newstalk’s Ger
Gilroy, a fellow Athy man. I was heading to Dublin with my two boys, Jack and Troy, for my last sparring session when I remembered that it would be playing on Off The Ball so I flicked on the station in the car.

“I’m delighted to say we’ve got Eric Donovan with us a week out from
his fight with Dai Davies….”

I hadn’t told Jack or Troy about the interview.

“Daddy, is that you on the radio?”

I had to laugh. I couldn’t have planned it better if I tried.

No alarm, no morning run, no gym work, now it’s my job to be lazy. And that can be hard when you are used to training at least twice a day. A day off is a rare thing for me. It can be hard to sit still. The kids keep me busy. With school in the
morning, it’s an early bed time for all of us. And that suits me just
fine.

This is my last full rest day. It’s just a chill day. Me and Laura and the two boys watched a movie after breakfast, Drop Dead Fred. After lunch, we went for a walk. Me and Laura had a coffee while the boys has ice cream. I wanted to eat the two ice creams! I was never as jealous of them so much.

I drop the boys to school in the morning and
then it’s time for me to clock in again – I’m back on duty. At this
stage, my training is very focused. I do small sessions, no more than
40 minutes. It’s short, explosive work – a lot of sprinting.

I’ve got Boxercise tonight so I’ll be down to the gym in St Michael’s,
Athy for 8pm. It’s a busy class with 30-35 people so I need to
conserve plenty of energy for it. I’m not just a professional boxer, I
also have a business to run. Without Eric Donovan’s Boxercise & Fitness, there would be no Lilywhite Lightning. I really appreciate the understanding and support I get from my clients when I take some time off for a fight.

Depending what way I’m feeling, I’ll do one or two sessions today and the same on Wednesday. Again the sessions are short – 40 minutes at most. If I’m running, it’s a tempo run to prepare my legs for how long I’ll be on my feet in the ring on Saturday night.

On the boxing side of things, I’ll be working the pads, going through combinations and rehearsing the shots. Mental preparation is just as important. Getting the head right for Saturday means taking a step
back and creating my own little bubble. I’m in my own world, mostly, for the rest of the week.

Night before weigh in can be nerve-wracking. Because this is a championship fight, my weight has to be spot on. My brother, Johnjoe, often says: ‘When you lose the four or five pound that you
have to lose, you’ll be reported missing.’ In the past, during my amateur days, I would have been close to my fighting weight the whole time. At a tournament, you could have four or five fights so you have to maintain the same weight. Professional boxing is just one fight in isolation. Tonight I’ll go to bed on an empty stomach, I’m quite dehydrated and hopefully I’ll be on weight in the morning.

Finally, the day of the fight has arrived. When I stopped fighting as an amateur, I felt like I had unfinished
business with boxing. Tonight is another stepping stone for me. I really believe I have a lot of intelligence in the ring, a lot of speed, a lot of desire and heart.

I feel absolutely honoured and privileged to be representing my home town and to have fans travelling from various parts of the country to support me. To have fans is an amazing thing. For me, that’s one of the greatest motivations ever. I want to create memories for people.

As John Duddy said, a boxer is the first to get hit and the last to get paid. But there’s nowhere else I would want to be tonight. I’m excited. I know what the atmosphere will be like when I get into the Stadium and it’s a buzz you can’t get from anything else in life.