Monasterevan’s heroes of ’77 to be honoured on special night

40 years on from the club’s last Senior Championship success, Monasterevan’s county winning team of 1977 will come together on Saturday evening to celebrate a very special time in the club’s history. 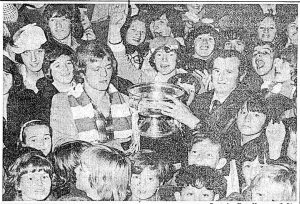 The 70s and early 80s in Kildare football had a very different landscape than the present day. Two teams in particular dominated, Raheens and Carbury, and both are rightfully remembered among the very best club sides in the history of Kildare GAA. But right in there mixing with them was Monasterevan.

They had already suffered more than their fair share of heartache as they headed into the 1977 season. The club had last won a senior title in 1911 but a fine team had come together in the 70’s. They enjoyed league success and won a couple of Division 1 titles but couldn’t manage to grasp that illusive county title. They made it as far as the final in 1973 and 1976 but on both occasions were beaten by Raheens.

They were determined to put things right in 1977.

Their championship began with a 0-7 to 0-3 win over Ballyteague in a bad tempered game, and a Nationalist report at the time said ‘they have deteriorated a lot since last season and will have it all to do in the next match against Springfield’.

That prognosis proved to be way off the mark and Monasterevan beat Springfield, an amalgamation of Rathangan and Ellistown, 2-9 to 0-9 in the quarter-finals, although goalkeeper Christy Lonergan, sadly one of two squad members who have since passed away, was called upon to make a number of fine saves.

That set up a semi final against their nemesis, Raheens.

It had seemed that Monasterevan were set for that familiar sinking feeling against the Pat Dunny led side when they trailed 1-5 to 1-3 at half time, despite playing with a strong breeze. Crucially, Liam Gleeson managed to get a goal at a time during the first half when the team weren’t playing particularly well but it was the introduction of Dave Hyland that really swung the game in their favour.

Alongside his brother Hugh, Hyland helped Monasterevan wrestle back control of midfield that day and it took a late penalty by Mattie Colgan to seal a famous 2-9 to 1-8 victory.

“It was a big thing to win that game,” remembered Hugh Hyland, who, due to Monasterevan’s success, went on to captain Kildare in the 1978 Leinster Final against Dublin.

“We learned from losing, we had great fellas in charge then, Brendan Quinn the trainer, Sean Duffy and all the selectors, the chairman, fellas that were cute and knew what need to improve on, which we did and we were fortunate enough to get through in the end,” he added.

That set up a day in the final and a day that will forever go down in the club’s folklore.

There could barely have been a soul left in Monasterevan as their supporters invaded St Conleths Park to see a team determined to make it third time lucky in the county final. 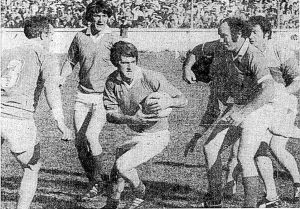 It turned out to be a superb game. ‘Kildare finals have not been epic encounters in recent years but this titanic struggle will be recalled for many a day, particularly around Monastervan’ said the Nationalist report, quite prophetically, at the time.

Up against a Carbury side containing the likse of Ollie Crinningan, Pat Nally, Pat Mangan and Dermot Reilly, Monasterevan were seen as underdogs.

“I said it in the Keadeen that evening when there were a few words being said, to meet and beat a team like Carbury in a county final was a great achievement. That Carbury team had serious inter county experience on that team,” said captain of the Pat Havens, when speaking to the Kildare Nationalist this week.

Monasterevan made a great start that day with Colgan scoring a penalty after just two minutes and a goal from brilliant full forward Bob Harrison helped them to 2-5 to 1-4 lead. A goal by Mangan brought Carbury back level with eight minutes to go but late points by Phil O’Brien and Liam Gleeson clinched a 2-8 to 2-6 win and sparked huge celebrations. 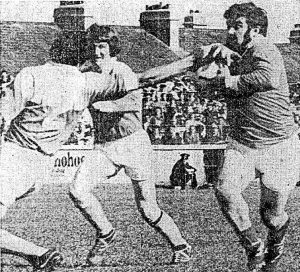 “They are great memories,” said Havens, whose son Lenny was part of the Monasterevan side that won a Leinster Intermediate title in 2012.

“ We had been the bridesmaids a couple of times, we had done everything else, won Division 1 titles, up to 1977 we just weren’t able to get over the line in the Senior Championship. It was great for a small club with a small pick to finally make it. At that time we had a very small pick but we made it work, we had a great team, a great bunch of lads. They were lads who just wanted to be out there playing football, they were great lads to train and there was great camaraderie there. The fact that I was captain didn’t make a difference, we were all on the same level.

“I’ve never in my lifetime seen the amount of people that were on the pitch after the game. Hugh Campion was chairman at the time, a nice fella, but I couldn’t get up to him to get the cup, I tried several times but I was completely mobbed, Hugh actually just threw the cup out to at the end of it,” said Havens

Liam Gleeson, whose brother Mick was also on the team, also has fond memories.

“We had a very good team. We thought we were never going to win that Senior title but that day everything fell into place for us and everything went right. After losing in ’76, once we made it back to the final the next year we said there was no way that we were going to lose this, and we didn’t.”

The celebrations didn’t end on the pitch that day and Havens remembers the joy that it brought to the whole local community in the weeks and months that followed.

“A well known GAA man in the town here, his father had died, he was actually a selector and couldn’t make the game because of that. When we came home we went up to see Sean Duffy and then went off for a few weeks. I was out for the whole week with that cup. There were 11 pubs in the town at that time and I think we did nine of them in the first day or so. Everybody in the town was very good to us. Down the line, there were people ringing asking could we come over with the kids to get a picture taken with the cup, it went on for a long time. It was lovely, you’d never be thinking at the time that you’d never see it again, you’d be thinking that we could do it again but it never happened,” he said.

Along with goalkeeper Lonergan, Joe Dooley has unfortunately since passed on but they will be remembered on Saturday on a night that will be filled with stories and memories from a fantastic period in their lives for all those involved.

“We’ve lost two of our players, Christy Lonergan and Joe Dooley, that will be a bit of a dampner on the night. There’s lads scattered all over the place, I’d see probably ten of them from time to time, there’s another eight of them that I wouldn’t see. Hopefully on the night we’ll all be there together and we’ll have a bit of banter,” said Havens.

Some of the squad will be making an extra special to make it on the night, including Christy Moore, who scored a point in the final, as he will dash from Dublin airport after returning from holiday to make it on time.

It promises to be a night of great stories from a cherished time.