THINK of Celbridge and Johnstownbridge and the same attributes immediately spring to mind.

Strength. Power. Mobility. Pace. And it should not be forgotten amongst all those physical attributes, some supremely talented footballers.

Some of the potential match ups are enough to make the mouth water. Fergal Conway and Conor Brophy versus Barry McNally and Sean Hurley in midfield. Paddy Brophy versus Luke Flynn. Mick O’Grady versus Daniel Flynn. Ollie Lyons versus Cathal McNally.

This is a game that we just can’t wait for.

For Celbridge, this is their fourth successive semi-final. Since their one and only county final in 2008, when they beat Sarsfields after a replay, they’ve lost five semi-finals, including in the last three years.

From the moment that Paddy Brophy announced earlier this year that he was returning to Ireland their chances of lifting the Dermot Bourke Cup received a huge boost but he isn’t operating on his own in the forward line. David Hughes and the experienced Shane Harte always chip in with scores but the Celbridge attack is a very well rounded one. They have players capable of scoring from their full back line all the way to their full forward line and can be very patient in their attack.

Fergal Conway deserves a special mention for them because there are few players as physically dominant in the Kildare Championship and he performs crucial duties in defence and attack for his team. Barry McNally is a giant of a man too for Johnstownbridge and is rarely, if ever, found wanting in the physical stakes but he will be tested to the limit by Conway.

Johnstownbridge are looking to get back to their first final since their last county title as well, back in 1996. During their spell in Intermediate football there were accusations of them being mentally brittle but in manager Brian Flanagan, they seem to have somebody who can get the best of the talent he has.

And what a talented squad it is. Injuries and spells in the AFL for three of their players have meant they have rarely been at full strength in previous years but with Keith Cribbin set to return to the fray after missing the quarter-final win over Clane, all their star men should be available. Sean Hurley is returning to his best in midfield, while there are times that Paul Cribbin and Daniel Flynn are simply unplayable in the forward line. The underrated roles played by the likes of Seamus McNally, Jimmy Farrell, Des Holton, James O’Connor and Sam Doran shouldn’t go unnoticed too. Luke Flynn is another who just keeps on impressing.

In this game of the two 2015 beaten semi-finalists, the team who are mentally strongest in the crucial moments of this game, particularly if it is tight late on, will win this out. That’s the big question about Johnstownbridge, they have been awesome this year but how will they react in a tight game under pressure? Celbridge have their own questions to answer in that regard. We’ll get our answer as to who deals better with that pressure in what could be a game for the ages on Saturday. 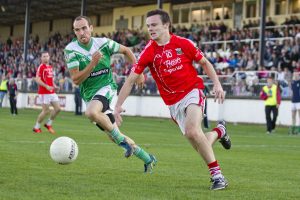 Kevin Murnaghan and Hugh Mahon chase the ball during the 2013 semi-final between Moorefield and Athy, Moorefield won 2-9 to 0-10
Photo : Piotr Kwasnik.

BOTH semi-finals this weekend really are too tight for us pundits to call and every team has their own strengths that could prove decisive.

That’s certainly the case here, at their best both Athy and Moorefield are well capable of winning this game.

Athy have looked in sparkling form since the resumption of the Championship and have had two big wins, but with all due respect to Clane and Round Towers, they bear little resemblance to the challenge facing Athy this weekend.

The big plus for the team managed jointly by Emmanuel Kennedy and Brian Cardiff is the return to fitness of some key players. It’s really the county title winning year of 2011 since Cian Reynolds has got this type of run of Championship games and he brings an intelligence and calmness to the half forward line.

Darroch Mulhall is another who has endured a miserable couple of years in terms of injuries but he is relishing playing in a deeper role than in other years and kicked four points from play from wing forward last day out against Round Towers. Further forward, the class of Niall Kelly and James Eaton has been well documented and nicely complement the pace and explosiveness of Hugh Mahon, while Liam McGovern is a consistent scorer both from play and free kicks.

They will certainly test the Moorefield defence. The experience of Liam Callaghan and Kevin Murnaghan is very important for them but they have some youthful legs around them. Mark Dempsey and Sean Healy have grown into the team, while James Murray and Ryan Houlihan have become real leaders.

At the other end of the field, Athy are strong too and although goalkeeper Stephen Davis went off injured in their last game, they look solid in the full back line and at centre back with Mick Foley. One area that Moorefield migh look to exploit though is perhaps at wing back. To give him his due, Sean Ronan was superb there against Towers but if Moorefield line up with David Whyte and Cian O’Connor in those positions Athy could be found physically wanting against their strength. Eanna O’Connor and the goal scoring ability of Niall Hurley-Lynch carry much of the Moorefield scoring threat and Mark Murray, Eddie Heavey and Adam Tyrrell can be relied on to chip in too. It remains to be seen whether Ronan Sweeney will start or continue in his impact sub role.

However, when all that is said and done, much like the other semi-final, it’s hard to escape the thought that the game could be won or lost in midfield. Kevin Feely and Paschal Connell versus Daryl Flynn and Aaron Masterson is a mouth watering match up. Moorefield got on top around the middle for the majority of their win over rivals Sarsfields in the last round and it played a huge part in their win. Daryl Flynn may be in the latter stage of his career but he showed in that quarter-final that he plenty still to give to his team, especially when Masterson offers so much energy beside him. Feely’s All-Star nomination is confirmation of his class, while many around Athy think Connell had his best game in a senior Athy jersey last time against Towers.

Again, like the first semi-final, this game is likely to be close in the final stages and no team in Kildare has been better in seeing out close games than Moorefield. It’s one of their core strengths that has helped them to so much success. It’s also something that Athy haven’t done as well but this year they appear better placed that ever before to control those pivotal moments. Players who were promising youngsters in that county title win of 2011 are now experienced campaigners who carry the hurt of many painful defeats and they are the players that Athy will look to late in the game.

It goes without saying too that discipline is key, these teams have shown in the past that sometimes when things go against them that the red mist can descend, the team that keeps 15 players on the field is the likely winner. But that is a side issue, this should be another cracker.