FOR those around the age of this reporter, Caragh Celtic were always one of the best sides in the KDFL during a time of breaking through to play senior football. 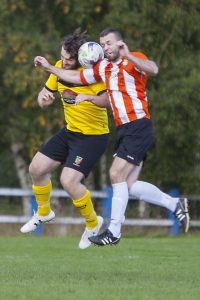 Stephen Riordan has played a big part in Caragh Celtic’s rise up the divisions in the KDLF
Photo : Piotr Kwasnik

20 years ago, they won the Lumsden Cup when beating Castle VillDia and anybody playing Caragh in the late 90s always knew they were in a game.

The club then endured a spell in the doldrums and dropped down the divisions in the KDFL but they have made a spectacular comeback in recent years.

Dicky Nolan was a player for the club in that Lumsden Cup final win in 1997. Now the manager of the team, he has played a big part in returning Caragh to the upper echelon of the KDFL.

“We had fallen a lot, down to Division 2. Myself and my brothers Niall Nolan and Ian Nolan and Eamon Sharpe and that decided that we’d have a go and see if we could build it up again. We won Division 1 and then went up and won the Premier the year after. This is our third year in the Senior Division so we’ve been building each year.

“A lot credit goes to those guys, and others like Tony Farrell, Ciaran Cunneen, people in the background. They did a huge amount to keep the club going. Winning Division 1 was one thing, then we went to the Premier and it was harder again, then we knew the Senior Division was a different kettle of fish altogether. We knew it was going to be difficult playing against teams who had been playing in the division for years and the first season was just about consolidating and staying up. Last year, we built on it again. With about five games to go last season had we won four and drawn one of those games we would have won the league I think, but we sort of collapsed in those games,” said Nolan, who still remembers the joy that Lumsden Cup win brought.

“It meant a hell of a lot to us, I remember us going crazy after we won it. The final was in Newbridge Town, and it was terrific to play there. There was a massive crowd there that day and I think there will be a big crowd there on Saturday too,” he said.

Caragh deserve to be playing in front of a big crowd because, like Saturday’s opponents Suncroft, they are within touching distance of three trophies.

There are three epic battles between the sides in store in three different competitions over the next few weeks, starting with Caragh entering the lion’s den by playing the Lumsden Cup final in Suncroft’s own ground but that is not something that bothers Nolan.

“We have played them there before there and the pitch is superb and their facilities with the dressing rooms are fantastic, you couldn’t pick a better spot for Lumsden Cup final. We’d love to win it this way, it would be great to go and beat them in their backyard,” said Nolan.

One thing that the Caragh manager is tipping this weekend is goals. Both teams have played 23 games in Kildare competitions this season, Suncroft have scored 79 goals, Caragh have 78.

“Wayne Bowers and Stephen Riordan have both scored 19 goals each up front for us and Dean Bowers has a huge amount of assists from the wing as well.

“We said this year that we’d give it a real go. We signed Dean Bowers last year and then Wayne Bowers this season, and then Shane Buckley, Sean Leeson, Danny Brady. Those lads all played with Eleson before.

“Noel Byrne is our captain and Darren Heavey is there as well. A lot of those guys have been with the club since we were in Division 1 and have been with us along the way along. Robbie Hannon is another who has been with us all the way and he plans to retire at the end of the season so we’re hoping he’ll have a few trophies to lift before that,” said Nolan.