Murray hoping first county final will be ‘Simply The Best’

KILCOCK full forward Ciaran Murray, who last Saturday night showed his dedication to the club by taking to the stage for their Lip Sync Battle as Tina Turner, is confident his side are well equipped to capture the Kildare Intermediate title against Raheens this coming Sunday. 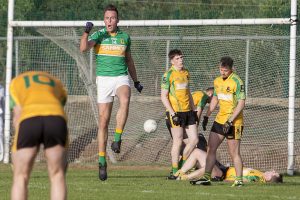 Murray, who is the son of All-Ireland winner Brian (Donegal 1992), is excited at the prospect of playing in his first county final with Kilcock alongside many of his childhood friends, while at the same time he knows only too well the task at hand against pre-tournament favourites Raheens, despite defeating them in Round 2.

“I am really excited to be involved in the final this Sunday and as you can see the build up and buzz in the town is really spreading. It’s been a long time since Kilcock have been in a county ginal (senior final defeat to Round Towers 2003) so it’s refreshing to see local businesses, shops and schools getting ready for the big day. We know ourselves it’s not going to be easy. Raheens are a quality outfit with strong players all over the park. It won’t be like our previous encounter in Round 2 of the championship and we know ourselves when it comes to a final it’s all about who performs best during the 60 plus minutes,” he said.

The 24 year old, who recently graduated from Templemore and is set to be stationed in Clondalkin Garda Station, feels his side are well prepared for whatever Raheens throw at them due to a mixture of well organised coaching and a season of massive dedication from a large crop of players, despite a poor league campaign that saw them just avoid relegation with victory in the last game. To their credit though, they haven’t looked back since.

“I feel the major difference this year is the strength and depth we have in the panel. We have lads coming in this year like Conor Caulfield, Patrick Kelly and Cian Duke who have made a huge difference. We had a tough league campaign, the games we have played we have prepared really well and were unlucky in a few. We were down seven or eight key players during a lot of the league and needed a win on the final game to stay up and I felt that win really puts in fine fettle coming into the championship. We knew nobody favoured us and we used that to our advantage. Those performances, the work in the shadows of the games and the guys have been really diligent, very focused and hungry for a place in the county final. Losing all the lads off our team for the majority of the season was tough but the management team of Declan Gibbons, Brendan Shovlin, Steve Sheeran and Daniel McLoughlin adapted our play and we have become more of a unit since.”

When asked about his father’s influence on his football career, Ciaran’s ears pricked up and you could see there and then the respect the 6ft 8’forward has for Brian.

“My father has always been involved since I first started playing GAA. If it wasn’t coaching me at underage level, it was shouting me on from the sidelines. He never misses a game. Neither does my mama infact! He’s a massive role model to me and I learn a lot from him, he tells me exactly as it is. He certainly doesn’t hold back. On the days it just doesn’t go right he’ll explain and dissect where it went wrong and how I can improve. He has seen players he has coached over the years like myself, Shaun Maguire, Shane O’Rourke and David Duke develop and I know how proud he will be when he sees us running out together to play in a county final this Sunday.”

Along with Brian, Ciaran is joined in Kilcock GAA most evenings by his mother Della and sister Lorna, where they are well known for their hard work and dedication. GAA runs through their veins. Della has only recently retired from camogie, where she played in her very own county final at 50 and is still heavily involved on the Kilcock Camogie board. Lorna is a county Camogie player with Kildare and only last week she captained Kilcock to Junior Championship glory against Clane. She also had the honour of lining out alongside her mother for a few years.

Ciaran has scored 3-4 from full forward so far in Kilcock’s championship run, including goals in the quarter-final and semi-final, justifying Declan Gibbon’s decision to move him to the edge of the square after some appearances at midfield during the league. His goals have come at crucial times, none more so than in the semi final, when he netted in the second half to finally put Monasterevan to bed. There is no doubt the big man is a threat and it wouldn’t be a surprise if he was to mark his first county final appearance with another three pointer. The people of Kilcock will be hoping that is the case and that Ciaran is as nimble on his feet as he was on Saturday night when dressed as Tina Turner.