New position for Coleman but same desire for winning trophies

FOR the best part of 20 years a very familiar sight around Kildare football pitches was Ray Coleman flying up and down the left wing. Whether in the KDFL or for a spell in the Leinster Senior League with Newbridge Town, Coleman played as an adventurous left back or further forward as a winger and put his classy left foot to good use. 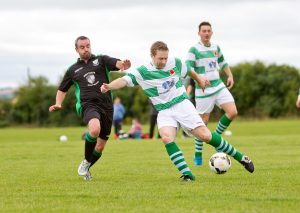 Ray Coleman (right) is hoping to lead Suncroft to a Lumsden Cup final victory, 16 years after playing in the club’s last win in the competition
Photo : Piotr Kwasnik

Now aged 39, he’s had to reinvent himself as a footballer but he has become a mainstay in the very successful Suncroft team. Nowadays he plays his football in the centre of defence but he admits that he found the transition to a new position difficult at first.

“I was playing left full for a number of years but the legs weren’t as fast as they used to be and it was actually Andy Cousins in Newbridge Town who decided to move me into centre half a few years. I didn’t really fit into that position for the first season but I think but I’ve grown into it, when you are a bit more mature you see the game better. I have Tommy Doyle in beside me who is only 19 years of age so it’s good that I can help these lads along. I’m enjoying the position now, I can see everything in front of me and though I might not be as fast as I used to be I’ve some good young lads around me that can cover when needed,” said Coleman.

His Suncroft team are facing into a pivotal few weeks of the season with they and Caragh set to do battle for three trophies, starting with Saturday’s Lumsden Cup final. The two will meet in a Senior Division league title decider in a couple of weeks and also have a Senior Cup semi-final to play too.

“It’s going to be an interesting finish to the season, the two best teams in the league in a Lumsden Cup final,” said Coleman.

The game carries extra significance for Suncroft since the final will be played on their home pitch. The venue was decided at the start of the season and once it was picked it gave Suncroft an extra motivation to reach the final.

“It’s a special day for Suncroft to be hosting and playing in the final but it won’t be too special if we don’t win it, that’s our main aim. When we first found out it gave us that extra incentive to try get there so it’s great to be in the final.

“The community are a credit and a lot of guys are doing a lot of work behind the scenes, the likes of Josie Dunne, James McGowan, Bernard Murphy. Not only the dressing rooms but the pitch itself, it’s the best I’ve seen it and I’m in and out of Suncroft for 22, 23 years. It’s a credit to them and it will be a special day,” said Coleman.

He is the one player sfrom the last Suncroft side to win the Lumsden Cup still playing for the club. That was against Curragh Rovers back in 2001 but Coleman still remembers plenty about the game.

“We didn’t play that well on the day but we had a very good squad of players, Leo Foy, Declan Day, Alan Middleton. We were confident going in but we were playing a good Curragh Rovers team and to be honest they probably dominated us on the day. They were 1-0 up and we got an equaliser in the last few minutes to bring it to extra time, then it went to penalties. My heart was in my mouth taking my penalty, it hit the crossbar and came down and bounced back into the roof of the net. In finals I suppose you need a bit of luck and we had it that day,” he said.

Coleman is one of the elder brigade on the Suncroft team but he thinks there is a nice mix with the younger players coming through.

“The likes of myself, Gary and Dylan Connolly and Darren Kilbey have played Leinster Senior League football, which stands to you. But there are some really good young players there and the future is bright for Suncroft for when myself and Gary and the others have gone,” he said.

Not that he is ready to hang up the boots just yet.

“I still really enjoy playing, even if I don’t always enjoy chasing after young lads. A lot of lads would tell you that I’ve been saying I’m going to retire for the last four or five years but I still get a buzz from playing and I don’t think there is anything to replace that. I’ll keep going as long as the legs allow me to. I do stiffen up for a few days after the games but it’s about looking myself, and I only live two minutes from the pitch which is a help as well.”