Cully ready to take on the world, one fight at a time

ON Saturday in Belfast, in just his second professional fight, Naas man Gary Cully gets the kind of opportunity that many other boxers have to wait years for when he fights on the undercard of Ryan Burnett’s world title unification fight against Zhanat Zhakiyanov. 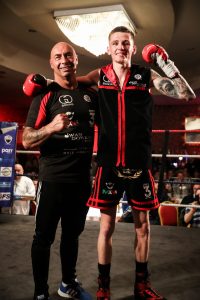 It promises to be huge occasion in Belfast in front of a fervent crowd and the main event will be televised live on Sky Sports. Even before he steps into the ring for that fight, Cully’s third fight has already been confirmed, on the undercard of an even bigger occasion in November.

Carl Frampton returns to the ring in Belfast on 18 November and on the same card Jamie Conlan will fight for a world title, Paddy Barnes will also be in action on the night. Cully will be there too, another huge opportunity for a man with so few pro fights to his name.

“I’ve been training hard and I was told when I signed with MTK that if I keep working hard that I’m going to get opportunities but to be on the same card as two world title fights and two televised bills within my first three fights, I couldn’t have dreamed of that,” said 21 year old Cully.

It’s no fluke or coincidence that Cully is getting these type of chances so early in his career. A highly talented amateur who was tipped to go to the Olympics, he has wasted no time in making his mark in the pro ranks and stopped his opponent on his debut after just 42 seconds last month.

“It was good in a way to start off with a stoppage like that but I had brought 70 or 80 people up to Belfast for that fight and had done a hard eight week camp. I wanted to look good, I was planning on going in and letting off shots for two or three rounds and looking good and then stopping him, I wanted to stop him but to do it late on. I didn’t even get to throw a head shot. Obviously it is good to start off like that and to put out statement but I would have liked to gone a few more rounds. The next fella I’m fighting is a bit more durable,” said Cully.

Durable certainly is the word for Saturday’s opponent, Michael ‘Mad Man’ Mooney. He’s lost 26 and drawn one of his last 27 fights but has only been stopped four times so he seems ideal for Cully at this stage of his career as he looks to step up the ladder.

Cully has been signed by Matthew Macklin’s group MTK Global and he’s very happy to be part of their impressive roster.

“They obviously believe in me. I didn’t get a chance to show them much in my first fight but they know what I was like as an amateur. Before I even signed they had asked a lot of people what I was like. They are signing a lot of people but they are signing people they believe in, they are not going to sign people they don’t believe in. They just signed Conrad Cummings and it’s just going to keep getting bigger and bigger.

“MTK have a certain amount of slots to fill on these big bills and they put their fighters in and they just picked me. They have looked after me, they told me to stay in the gym, stay sharp and that I should always be ready at two week’s notice, which I am anyway because I like to live a professional’s life. You have to be ready, you can get the call for a big fight at very short notice and you have to be ready to go,” said Cully.

Currently the Boxing Union of Ireland will not sanction any MTK shows in the Republic of Ireland due to a link to an incident in the Regency Hotel in Dublin last year but Cully is hoping that could change in the new year.

“Hopefully after Christmas that might change. MTK fighters can fight in Dublin, MTK can’t run any shows in Dublin at the moment but I could still fight on somebody else’s show. They have a lot of fighters from down south so I think they could fill arenas, not just the Stadium. I’m dying to get a fight in Dublin, I’d love to bring a good crowd up there,” said Cully.

Away from that incident, there is no doubt that MTK are a growing force in boxing in this part of the world, as their ability to put on nights like the upcoming events in Belfast proves.

They are supporting his training and Cully feels he had the best camp of his life in the build up to his first pro fight under trainer Pete Taylor and alongside stable mate Davey Oliver Joyce,  and that has just continued in the lead up to Saturday’s fight. 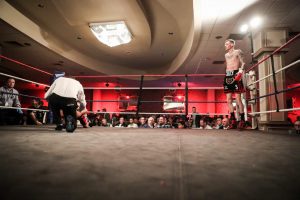 Cully stands back and lets the referee do the counting after flooring Gyuala Tallosi with devestating body shot just 42 seconds into his pro debut
Photo: www.photosbyricardo.ie

“It was the best camp I ever did. I was out in Marbella for two weeks as well and it was my first camp with Pete too. I was sparring with Davey, then out in Marbella I was sparring with Tom Stalker (a former European champion from Liverpool, who lost a British title fight at the end of September), I did some rounds with Eric Donovan before his fight. I was getting some deadly sparring.

“Pete’s boxing knowledge is class, to have Davey there as well makes it a good team. The first camp we didn’t really know each other, I knew Davey from the amateurs but we were still kind of gelling. Me and Davey spent time together in Marbella and we’ve got to know Pete better so this camp is going really well. The three of us are working really well together,” he said.

Taylor has helped Cully alter his style slightly in the pro game and he has been working on adding more power to his punches. Improving his technique only increases the potential of what Cully might achieve. There aren’t many fighters in the lightweight category standing at 6’2” like he does and the lightening handspeed that was his trademark in the amateurs hasn’t gone anywhere either.

“The hand speed hasn’t changed but the footwork has a little, you have to sit down a bit more in the pros. The first day out in Marbella I was sparring Tom Stalker and we did six rounds and I was up on my toes and his coach was just telling me to slow down a bit. It’s not the amateurs anymore, you don’t have to go 100 miles an hour all the time. It’s true, and you have more power in your punches when you sit down a bit more. You can look for openings and can look to hurt lads rather than just trying to clip them to score points. You have to be physically strong on the inside on the clinches too to push these lads around. It is a little bit different but if you have boxing ability and you’ve come up all the way you’ll adapt pretty easily, I think I’m adapting well at the minute. I think it suits me a bit more.

“I was sparring Declan Geraghty last week and he couldn’t believe how awkward I am. I was finding him awkward but when I got out of the ring he told me I was the most awkward fighter ever. Most lads I’m going to fight are 5’8 or 5’9, I’m 6’2 and making weight easy. You’ve more power punching down, especially when there is no headgear, and we are only using eight ounce gloves as well. The gloves are very different, I put on those eight ounce gloves for the first fight and couldn’t believe how there was nothing in them. In the ten ounce gloves there is a bit of bubble on the front of them but all the weight in the eight ounce gloves are in the wrists,” he said.

Cully is starting to get recognised a little more around his home town of Naas since his first pro win and he hopes that will increase further if his fight is included on Sky’s coverage on Saturday or on BT Sports in November.

“Since the first fight I have sort of noticed more people around the town knowing who I am. I was down at the opening of Unit 3 Gym recently, kids were asking me to sign gloves, it was mad. The following is growing but to get on television is what I need to get my name out there. I want to get on television and get out there and impress but even if I’m not live on television the cameras will there. Eddie Hearn will there on Saturday, the next one is a Frank Warren show. They are going to be watching so I want two big performances and hopefully I can catch their eye,” he said.

Expect to hear a lot more about Gary Cully in the very near future.