THE honour of being called up to represent your country is not something that Athy’s Kevin Feely takes lightly but he does admit that the potential to visit a country that he always wanted to see makes his inclusion in the Irish squad for the International Series all the sweeter. 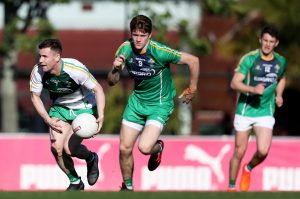 “I have never been to Australia before in any capacity. It’s always been a country that has appealed to me. Even from talking to friends and I’d know lads who have gone over for work, it’s supposed to be a brilliant lifestyle and a way of life and it’s somewhere that I always looked forward to going to see at some stage in my life. For that alone, I was delighted but then as well obviously it’s chance to represent your country with other such good players from all over the country. There was no better feeling than hearing that I was going to represent Ireland again,” said Feely.

After leaving Ireland early on Sunday morning, the Irish squad landed in Melbourne around 24 hours later and they have trained there ahead of the first test in Adelaide on Sunday (6am Irish time).

“We’ll be going to Melbourne first even though there is no match there, I think we’ll be using all the AFL facilities there because that’s known as the AFL capital of Australia and I know that’s supposed to be a brilliant city. Hopefully, we’ll get a bit of down time in Adelaide and Perth to have a look around. I know Paddy Brophy and Sean Hurley will be able to fill me on what I should go and see around Perth. I’m really looking forward to any spare time we get, I’ll be doing my best to see as much as I can,” said Feely.

Not that he will have a whole lot of free time, as well as preparing to face the Aussies in their backyard, Feely will have to keep up to date with this college work too.

“I’ll be under pressure to get assignments and presentations done when I’m over there. I’ll be missing out on a good bit but I’ll just do my best to stay on top of it when I am out there,” he said.

With such a strong Irish population in Australia the squad are sure to cheered on by fervent support during their time there and Feely has already planned a reunion with a couple of guys with whom he won a county title with in 2011.

“I’ve been talking to a good few guys from Athy already who have said they will be in Adelaide for that first test. Hopefully it will be a great opportunity just to catch up with them and have a chat.Joe Kinahan, Jacko Brophy, there are a good few footballers from Athy down in Australia and then some older people as well who I wouldn’t have talked to as much but who I am looking forward to meeting when I am over there,” said Feely.

It’s not the first time that Feely will have represented his county but he thinks this call up is on a different level to his one under 21 cap earned while playing soccer.

“I’d say there has been a few who have played underage soccer for Ireland and gone on to play in this series but to do this at senior level means that little bit more than doing it at underage,” he said.

Feely began the process of being selected for the squad when he attended the trials in Abbotstown in Septmeber, along with Kildare team mates Daniel Flynn and Paddy Brophy, and admits that it took him some time to get used to the new sport.

“It definitely took me a while to adapt to the game. It’s very different to football, a completely different sport really and it took some time to get my head around it. From the kick pass aspect of it, in GAA you want to play into a forward with one bounce and hop it into his chest but there really is no value to that sort of pass in this game. It has to be on the full, in the air to give the forward a chance to catch it and take a mark. In that respect, it took a while to get used to.

“As well in football, my game would be an awful lot about possession so getting on the ball and receiving hand passes from half backs and other players and again in International Rules there is very little value in getting on handy ball like that. It’s kind of a warzone in the middle of the pitch there and if you are on the ball in the middle of the pitch without it being a mark you are going to be under serious pressure because of the tackle rule. It did take a while to get used to but after the first two or three sessions I started to get my head around it,” said Feely. 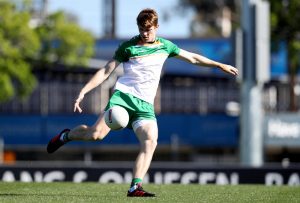 It took Feely some time to get used to the different rules of the International Series
Photo: INPHO/Tommy Dickson

The fact that he had two Kildare team mates there at the start and would have known the likes of Niall Murphy from Sligo and Enda Smith from Roscommon from his time in DCU meant that there were no problems in settling in with the squad, and instead, Feely has revelled in mixing with the elite players from around the country.

“I’ve found it a brilliant experience because it is all the best players in the country. To even see how they go about preparing for matches and what their mindset is during matches and what how they communicate and stuff like that during matches is a brilliant experience. I’ve really enjoyed that aspect of it,” said Feely, who has also had Dermot Earley, art of the management team  alongside Padraic Joyce, Darragh Ó Sé and Dermot Earley and manager Joe Kernan, to keep an eye out for him.

“Dermot has been doing his best to look out for the Kildare boys while we’ve been up there, just making sure we are ok with the rules and just passing on little bits of advice,” said Feely.

Feely knows the Australians will be gunning for victory on their home pitches.

“I would have started watching the AFL a lot over the last couple of years because it’s on telly more now and you’d recognise a lot of names from what you would see on telly. I know they aren’t picking the guys who were involved in the final of the AFL competition, that’s understandable and probably similar to the Dublin situation we have ourselves. Even aside from that there is a huge amount of superstars on their panel. Athletically, it’s going to be a huge test for us to see where we stand and see if can match them in things like pace and power and strength. I’m really looking forward to that test,” he said.