AFTER landing a decision on points in his professional debut in September, Newbridge boxer Chris Mullally is looking to improve again when he steps through the ropes in Citywest this evening. 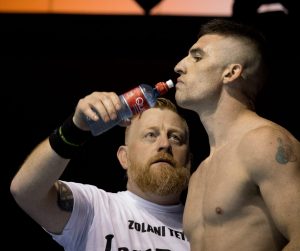 The light heavyweight had Przemyslaw Binienda down in the final round of his four round victory but admitted that he had to work on his fitness. Since then he has been working hard with Stephen Kavanagh in Kilnamanagh Boxing Club and he is happy with the results.

“It was a learning curve, the pro game is a bit rougher. I was pleased with the win but I was a bit disappointed with my fitness. I’ve worked on that since and it’s getting there now.

“I’m with Stephen in Kilnamanagh and have been working away with him. I’m in better shape now for this fight. The camp has been flying along and I’m seeing good improvements in my power and in my fitness so I am happy enough coming up to this fight,” said Mullally.

A noted underage boxer when he used to fight out of the Ryston Club, Mullally is still getting used to being back in the ring after a long time out of the sport.

“I took four or five years off, I just took a break but I got an offer to go professional so I just took it and I’ll see where it takes me now. It was hard getting back into it fitness wise but after a couple of weeks of training I was getting back in to it. It’s about keeping busy now and the coach wants me in as many fights as possible without burning myself out. That’s what I need now,” said Mullally, now 24.

He’s kept those links with the Ryston Club and is still in contact with the coaches there.

“I still live in Newbridge and travel up to Dublin for training every day, if I can’t make it up there I do a bit of training in Ryston. I’ve kept in contact with the lads there and my old coaches have been to watch me fight and they are always there for me if I need anything which is great,” he said.

Tonight, Mullally is in against Manny Bique, who was beaten on his own professional debut last month.

“I’ve seen videos of him and I’m confident coming up to it. He doesn’t like power so I’ll keep on top of him and see what happens. I’m not big on studying my opponents, I like to get in and do my own thing. If you look at them too much you can get worried about them, I like to take it handy until the fight comes and then do my own thing when I get into the ring,” said Mullally. 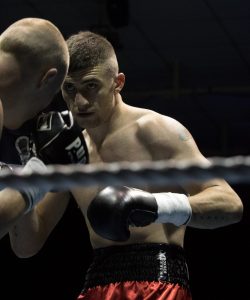 After hopefully claiming his second win in the pro ranks, Mullally is looking to have a busy 2018.

“The pro game is flying in Ireland and hopefully it keeps going like that. Hopefully I can keep winning and go some place with it, I’ll just keep working hard. I’m just working on bits and pieces and just trying to improve parts of my boxing and make them suit the pro game. Other than that, it’s just about working hard on my fitness.

“I wouldn’t mind getting out again before Christmas but I don’t think the coach will put too much pressure on me, I’ll just enjoy Christmas and then hopefully have a busy 2018,” he said.

He has no specific targets in mind but after showing he has the talent at underage level, it’s just a matter of transferring that to the pro ranks.

“There’s a couple of chaps in my weight that I’d know. I’d spar Steve Collins jnr, he’s a sound a chap but I’m not really targeting anyone, whoever wants to fight I’m happy to get in the ring. I just want to work my way through them and keep winning,” he said.