2018 is going to be a big year in the life of Jamie Smith. Not only is the KDUL Head Coach busy preparing the Academy’s Under 14 team for June’s Kennedy Cup but he has just been accepted onto the FAI course to study for his UEFA ‘A’ coaching licence this year. 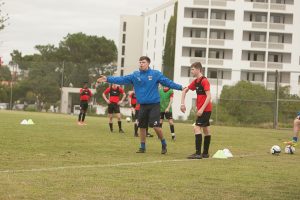 His application for the highly sought after place on the course has been successful but as a former Irish underage captain and somebody with an excellent coaching CV already for such a young age, there was never much doubt that he would earn his place on the course, even though he has only just turned 24. Now, the hard work begins.

“I’m delighted to be accepted onto the course. I was 24 last week and the course finishes in August so once I’ve completed it I’ll have my ‘A’ licence at a very young age,” he said.

Smith spent 18 months as a youth player with Newcastle Utd but even before his time at the English club came to an end he was already switching his ambitions from playing to coaching. He spent four years at Carlow IT and wants to continue to progress in his coaching career. There are not many people in Ireland pushing for an ‘A’ licence at his age but that he is something that he was very keen to achieve once he returned to Ireland.

“That’s the goal I set myself when I came back from England, I wanted my ‘A’ licence by the time I’m 25 so I’m on the right track for that. We’ll just have to see how it goes from here.

“It’s going to be a lot of hard work. There are six week-long blocks during the year so it’s pretty intense. I did the ‘B’ licence two years ago and it was pretty hard, a lot of hard work went into that, a lot work on the training ground. It’s worth it in the end, this is what I want to do, I’ve set myself a lot of targets and the ‘A’ licence is just one of them,” said Smith.

A keen student of the game, Smith is always looking to learn and he is confident that he will be able for the course no matter what is thrown at him.

“Football is always changing. I was at the FAI coaching convention in November and some of the talks from other coaches were brilliant. I’m looking forward to seeing the course content and seeing what’s on it but I am confident that I will get the licence,” said Smith.

Certainly, if anybody from the FAI was in Portugal earlier this month to see the high level of training Smith put on for this year’s KDUL Kennedy Cup team they could not have been anything other than highly impressed. 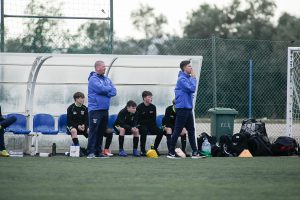 Smith captained Ireland at under 16 and 17 level, spent time on the books of Newcastle Utd and since coming back to Ireland, has completed a Bachelor of Arts Sports Management & Coaching in Carlow IT

Organising a training week with two training sessions a day building towards a game at the end of the week, and looking after the player’s down time, takes some planning but Smith had everything down to a tee.

“Before we leave I plan out what we need to do and what the roles of each of the different coaches coming with us will be. Each session is planned before we leave for Portugal and we also have everything planned out for the next six months too. We know what we need to work on but being able to work with the full squad for a week is such a bonus. We only train once a week at home and sometimes it’s hard to get everybody there.

“It’s our sixth year coming out here to the Alfamar Hotel in Albufeira as an academy and it was very good once again. We are well used to training there now, the weather obviously helps but getting the whole squad together for the week is a big plus, that makes a massive difference. It’s a massive stepping stone for everybody as we head into the last six months of preparation ahead of the Kennedy Cup,” he said.

Many of the current squad have been with the Academy for three years now and with each passing year, Smith sees the standards improving at the Kennedy Cup age group and he feels this is a testament to the KDUL’s desire to keep improving.

“You always find the first two or three sessions over there that there is not that sharpness but by the fourth or fifth session everybody is really buzzing. They all knew there was a game at the end of the week so they were vying for places in that starting 11, it’s a very competitive squad. That’s something that we have found over the last few years, the squads are getting more and more competitive which is great for us,” he said.

The week in Portugal culminated with a 2-1 win over a local side with the goals coming in either half from Dean Owens and Alex Conlan.

“They were a different sort of opposition to what the lads would be used to at home. The Portuguese team were very physical but as well they had great technique and technical ability. The lads played brilliantly though. The two goals we scored were straight from the training ground which makes it even more pleasing as a coach. The first was a set piece goal from a corner that we had been working on. The second one we played out from the back and played through the midfield, the movements that we had worked on paid off and Alex Conlan scored a great goal,” said Smith. 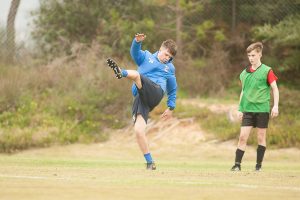 Smith had good help on the training pitches too and was delighted to recently draft in current Shelbourne midfielder Mark Hughes to the KDUL.

“Ten years ago my dad and his dad took the Kennedy Cup team and we played on that, this year myself and Mark will be taking the Kennedy Cup team along with Anto Murphy. Mark has been brilliant since he came in, he has great experience. I’ve been close friends with him since I was nine or ten so having Mark there is brilliant. He offers the midfielders great advice and the kids absolutely love him, they really look up to him, they see him as a role model. He’s a great addition to the Academy,” said Smith.

Goalkeeper coach Sean Fogarty, currently on the books of Irish League Premier Division team Carrick Rangers, is another key member of the coaching set up.

“I’ve known Sean for three or four years now. He was our goalkeeper in IT Carlow, that’s where I got to know him. He comes down every Sunday and works with all our Academy goalkeepers and it was massive to have him in Portugal with us. We’ll only see the improvements in the next few years but having him in the Academy will improve the standard of goalkeeping through the league,” said Smith.  The coach also had special words of praise for his managerial sidekick Anto Murphy.

“Myself and Anto have been working together since 2013, we are very close friends away from football as well. I think we have the same ideas when it comes to how we want our teams to play so I think we really work well together. I couldn’t do it without Anto,” said Smith, who knows that all that coaching expertise is going to be crucial as the Kennedy Cup team enter their final six months of preparation.

“The next six months are some of the most crucial months these lads will have as players. They are a great age for developing and we have to push on now. We only have them on a Sunday at the moment as well as an extra gym session they do but once the nights start to get a bit brighter we’ll have training three times a week. We’ll have camps in mid term, at Easter and we’ll have three or four games as well before the Kennedy Cup. The players are in good shape now, they are looking good and it’s up to themselves now as to who is going to make it into the starting team,” he said.