THE fortunes of Joe Quaid and his team won’t be the only Kildare interest in Division 2A of the National Hurling League this season. 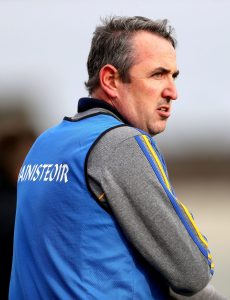 Fintan O’Connor has come a long way in the hurling world in a relatively short period of time
Photo: ©INPHO/Bryan Keane

Fintan O’Connor, originally from Calverstown and who attended CPC Kilcullen, is in charge of the Kerry hurling team but his journey to managing at intercounty level has been anything but routine.

By his own admission, he never played hurling when he was younger and it was only when he moved to Waterford after attending WIT and started to teach at Blackwater Community school in Lismore that his interest in the game was piqued.

“I never played hurling myself so it’s strange I suppose. I was teaching in secondary school in Lismore, I started about 15 years ago. Hurling is massive in Lismore so I started out coaching the first and second years and it just sort of took off from there. I had a bit of success with the school and then different club teams asked me to get involved with them, Fourmilewater and then Cappoquin, we won the Munster Intermediate Club title the year I was involved with them. I was involved with WIT in the Fitzgibbon that year as well and we won that too,” said O’Connor, now 39.

After immersing himself in the game, O’Connor proved a quick learner and he never felt that his lack of playing experience held him back.

“When you dealing with under 14s starting out they don’t really care if you have a knowledge of it, they are just mad to play. I wouldn’t say you pick it up quickly but if you are surrounded all the time by people who are mad into it and all they want to do is talk about it then you do learn. You’re going to schools matches then a club team at the weekend then a college team as well and suddenly you are doing it more than anything else and it becomes your life. I enjoy it and I like it, I wouldn’t say it I’m a genius at it by any means but I’m learning the whole time,” he said.

The sort of success that he enjoyed in a relatively short period was always going to attract attention and in 2014 he was asked to join the Waterford senior team as selector by manager Derek McGrath.

“It was funny because my knowledge of Derek before linking up with Waterford was of us killing each other on the line in schools and club matches in Waterford. We’d be fairly similar that way, we’d be pretty emotional at times. We’d be killing ourselves over stupid things, like under 15 schools matches because we played De La Salle a fair bit. Then when I was managing Fourmilewater we would have come up against his club team as well. It wasn’t something I was expecting but it worked out well, Derek was a great person to learn off,” said O’Connor.

The fact that he had taught many of the players in Lismore and then managed some during WIT’s Fitzgibbon success helped O’Connor settle in immediately.

“A lot of the lads involved in the Waterford team I would have had them in school so I knew them, the likes of Maurice Shanahan, Jamie Barron, the Bennetts, Darragh Fives, they all went to school with me in Lismore so I had them since they were under 14. That was great, it was nice to have that sort of ‘in’ with them before I started. Then there were the WIT lads, Paudie Mahony, Jake Dillon and Gavin O’Brien. All those guys won a Fitzgibbon with me so I had a bit of knowledge on them before I started,” he said.

After a couple of years working alongside McGrath, the chance to go out as a manager in his own right with Kerry at the start of last season proved to be too much of a chance to turn down. He has enjoyed his time so far in the Kingdom but admitted that watching Waterford’s run to the All-Ireland final, and eventual defeat to Galway, was tough.

“It was hard that I wasn’t part of it but I was so delighted for the lads too because I know much effort and work they put in to get to that position. I suppose it was bittersweet really, you’d delighted for them and hoping they will get the All-Ireland but you’re probably saying ‘Jeez, I’d love to be there’. Having said that, I really enjoyed Kerry last year, even if we didn’t have a great year. The experience of being manager and dealing with a different set of players and in a different set of circumstances and at a different level of expectation was an interesting project in itself. I enjoyed that but looking at Waterford in the All-Ireland final, I was heartbroken for them and could feel their pain,” said O’Connor.

Life as an intercounty manager is time consuming but O’Connor says the work load in Kerry is slightly less than he experienced in Waterford.

“I would have had a fair insight from Derek how much work is involved and how much time and work he put in to the Waterford job but it is different. There’s eight club teams in Kerry but when you go to watch club championship in Waterford there’s games on Friday, Saturday and Sunday whereas in Kerry, there’s four games in the first championship so could get to all those if you are down there on a Saturday or Sunday. It’s not as bad in terms of workload but still from admin and video analysis and things like that it would be similar. I went in with my eyes wide open and I knew what I was letting myself in for. I’m lucky to have an understanding wife, or least a wife who is happy to see me going out the door,” he laughed.

Although relegated to Division 2A for the coming season, Kerry already made headlines this year for a win over Cork in the Munster League, believed to be Kerry’s first ever senior hurling win over the Rebel County.

“It gives a bit of profile to the team in Kerry. We’ll never match the profile of the footballers obviously and the success of the football team. The absolute excellence of the footballers is an aim for our hurlers, I’m not saying the hurlers are any less ambitious but the playing pool is so different. Hurling down here is making great strides and everybody is putting in a massive effort. This year in Division 2A, people will be saying that Kerry could come straight back up after being relegated but we are looking at the teams in 2A and it’s just as competitive as last year for us. Last year we were going into games against the likes of Galway and Limerick thinking if we can keep the score down we’ll be happy, this year every team in 2A can beat every other team,”said O’Connor.

He brings his team to his home county on 18 February and is looking forward to having the opportunity of managing in front of his parents.

“I’ll look forward to going to Kildare, my mother and father will be going to that match and they wouldn’t usually go to the Kerry matches so it will be nice for them. Kildare are after making good strides and had a good year last year, they had a very good league so I know we’ll under pressure going up there,” said O’Connor.

His hectic lifestyle and love of hurling means that it will be a rare trip home.

“I went to Waterford for college and stayed down there and then I got married to a girl from Tipp so I’m actually living in Tipperary now. Living in Tipp, working in Waterford and training the Kerry hurlers so I’m never really at home. I’m involved with the local club in Tipperary, Ballybacon and we got to the Munster Junior final this year. I managed St Rynaghs in Offaly last year as well, we got beaten in the county final which was heartbreaking. When you love something it’s not like a job, you’re just mad to go and do it,” said O’Connor.

Moores men lead hunt for footballer of the year

Lilies in search of elusive All-Ireland