ROY Sheahan is a fighter. He was born a fighter and even though he has spent a long time away from the boxing ring, that fighting spirit has never left him. 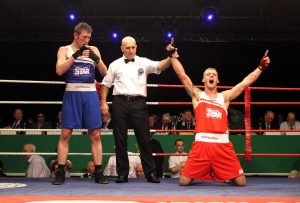 Apart from a brief return to the ring in 2015, when he won his fourth Irish Senior title after barely three week’s training, Sheahan has been out of regular action since 2013. He has been working away on building sites living a normal life in the last few years but there was always a thought nagging away at the back of his mind. He wanted a crack at a professional fight.

Over the last 18 months he has seen friends Eric Donovan, David Oliver Joyce and Ray Moylette turn to the pro ranks. There were others too, fighters that he knew he could match, that have gone pro and all the while Sheahan was thinking would the right opportunity come his way.

That chance came before Christmas. He was approached to gauge his interest in entering the new Last Man Standing competition. It all seemed so enticing, €25,000 and a mandatory shot at the Irish title to the winner, the competition live on TG4 but even with all that, Sheahan’s first reaction was to say no. At 33, out of training and working long hours on the sites in Dublin, he thought it was too late in his life. But over the next few weeks that fighter instinct kicked in and he thought, ‘What if this is my time?’.

“Initially I thought I can’t but it was always in my mind and there a couple of weekends ago I said I’d do it, put the head down for a few weeks and go for it. No regrets in life, I have to do it. It had been playing on my mind. I was approached about three months ago and it stuck in my head and I was always on about it to my family members. I was in it then I was out of it but then I just decided that I have to do it.

“It’s something I had to do before I hang up the gloves,” said Sheahan.

But the gloves were more or less hung up, so much so that that he needed to go off and buy all the gear required before beginning training in Stephen O’Rourke’s gym in Inchichore last week.

“There’s lads there winning titles that you’d probably stop in the ring and they are going on winning titles and some of them are getting well paid as well. Why can’t I go in and have a few pro fights? Even just for my kids to say that their daddy was a pro fighter. I just want a few pro fights, I went through the amateurs, I have nothing to prove to nobody after what I’ve done in my life in boxing. This is just something I have to do and if I don’t I will regret it. What happens after this I don’t know. If I do well I might have a few more fights after this, if I don’t, it’s probably back to work.

“I always wanted to have a few pro fights. My mate Eric is gone pro and Davey Oliver is gone pro and they are doing good. I was talking to another friend, Ray Moylette from Mayo, and he is gone over boxing in America. I was chatting to him the whole time and he was with Assassin Promotions. I sat down with them one day to see what options I had. I was thinking about giving it a go but I couldn’t really leave work because I have a family. I couldn’t just drop everything and go, it’s a hard game to make money in because you are always looking for sponsors, selling tickets, it’s a hard life. Then, this Last Man Standing came up and they wanted me in,” said Sheahan, who is very thankful to his full time employer Dan Curtis for giving him some time off and allowing him the chance to devote the time needed to giving this opportunity his best shot.

“I work for Dan Curtis of Kendra and he’s helping me out a bit for these next few weeks. It’s a big help because for the next few weeks I’ll be travelling up to Stephen O’Rourke’s gym in Inchicore six days a week. I need to get out of Athy to train for this and really push myself. Stephen has a few pros and good amateurs up there, brilliant lads for sparring. The training is very, very tough and that’s what I need if I want to do in this competition,” said Sheahan.

He pulls no bones about his current physical shape. Sheahan has a young family and works long days which simply don’t allow for training.

“I’m working on a building site so working long hours, up at 5.30am and then I’m not home until after seven in the evening. You  come home and get something to eat and then you’re in bed and gone again the next morning, you don’t have time to train. Sometimes, I don’t have time to see my own kids at times when I get home, it’s hard,” he said.

What’s also been hard has been his reintroduction to life in the gym.

And yet, even with all the sacrifices that are needed before the night of the event, in the National Stadium on 3 March, he knows he would never forgive himself if he didn’t give this a try.

“If I didn’t do this it would always be in my head why did I not try that. Even if I go in and get a body shot in the first second of the first round and I go out, at least I tried and put the effort in,” he said.

Sheahan’s pedigree at amateur level, and he really was one of the very best that Ireland has produced over the last 20 years, means that many, including his former Athy and Irish team mate Donovan, have made him favourite for the event but he is under no illusions about just how far behind he is from the other seven fighters in terms of fitness.

“Hats goes off to everybody in this competition, it’s going to be eight good lads. They all have good records, some of them are unbeaten. I know for this competition a loss on your record doesn’t mean that much but the winner will be closer to a title as well. Some of them are used to doing six, eight, ten rounds and they are coming back down to do three rounds. It won’t be an easy night for anybody. Everybody I see talking about it has their own favourites but it is very hard to pick a winner.

“A lot of people fancy me because I have the name. I came back two years ago and won the Irish title but I have to adapt to a new style now, new training, everything is new. Pro style and amateur style are totally different. People say the three rounds will suit me but they forget that I haven’t been training, these lads are. I appreciate whoever is talking about me and thinks I’m going to win, that does give me a boost and makes me want to train harder but I know the competition I’m going in against. There is no walkover, none of these are journey men, they are all top class fighters who could go on to European and even world level.

“None of these are in it for the money, they want to go after titles. This is their life. My job with Dan Curtis is still there when I go back. These lads don’t work, their job is boxing.

“The €25,000 would be nice, it would be a nice bonus for any of us. After that though there are title shots and more money. This is just the start of it for the winner, they will be set up. There’s an Irish title shot straight after it and other chances after that,” said Sheahan.

The money isn’t his main motivating factor but it would help him clear a few bills.

“I didn’t go looking for sponsors but I will have to to try help me out. Financially in the last few days I’ve spent a fortune. People don’t see things like brain scans, blood tests, eye tests. I had to get all that done myself and financially it’s tough. I haven’t been in boxing for two years so I had to go and buy all the equipment that I need. I’m broke, getting money off my mother and girlfriend. I will pay them back, hopefully I’ll win this and that won’t be a problem,” he laughed.

This is the first time that this style of event has been ran in Ireland and it is sure to draw a lot of attention to it in the build up. Similar style Prizefighter events have been ran in England and have proved to be massive successes and Sheahan knows the all action three minute three round fights will create a great atmosphere but he wants a plan when stepping in the ring.

“Everybody wants to see the blood and the knockouts but you have a gameplan going in there and be cagey enough. Look at Mayweather, boxing is about not getting hit. Sometimes you are going have to trade and stand down on your feet but it will just come down to who has more heart on the night. It won’t be easy for anybody, its three fights on one night.

He fought twice last year, in Scotland and Belgium, but will have a fight on 10 February to help rid him of some of the ring rustiness.

“I’m fighting in England in February. I need one, just to get back into the ring again. It’s not easy coming back after a big gap and going straight into a big tournament like this. I would have liked two fights but there’s only the time for one, but I’ll have plenty of spars too,” he said.