FOR Eric Donovan, the ultimate dream is still to become a European champion but on Saturday night he will fulfil another big ambition of his. 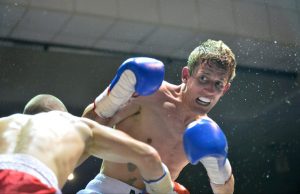 His seventh professional fight on Saturday evening against the Hungarian Ignac Kassai will be his first outside of the National Stadium and he will be backed by a large, vociferous crowd.

“I’m looking forward to that because you can get very comfortable within yourself. I just think a new venue will bring another atmosphere. It will be good for the fans too, location wise Waterford IT is good, Waterford city is good craic and a lot of people are staying down. I’ve always dreamed about making my fights something of a carnival atmosphere just like people would have at football matches and things like that. I always dreamed about creating something like that. It’s happening now and I have to be present and enjoy it because it’s happening before my eyes. I think there are 150 plus going down and 50, 60 staying down so it’s brilliant, I dreamed of this sort of stuff,” said the featherweight.

“If you are professional boxer without any fans you are nothing because it is the fans that bring you to life, it’s the fans that push you along on this journey. If I didn’t have these fans I probably wouldn’t be a professional because it doesn’t matter how good or talented you are, this is a business and you have to be able to put bums on seats. You have to be entertaining. I have all that pressure on me. As well as running around with tickets, trying to train, organising sparring, looking after the diet, running a business, all that sort of stuff. But look, I don’t want to sound like I am complaining because I chose this life and even though it’s not worth much to me financially I believe in myself, I believe there is something left for me to achieve. It’s the European title that I think about and dream about and that’s what keeps me going and drives me. Until I get that I won’t be content,” added 32 year old Donovan.

On Saturday he gets in against the experienced Kassai. The 37 year old has 22 wins on his record but Carl Frampton, James Tennyson and Declan Geraghty are among those who have inflicted 55 defeats on him. Donovan expects to win and expects to put on a show but at the same time, takes nothing for granted.

“I don’t know a lot about him, I don’t spend much time watching opponents, if you spend too long looking at opponents you can over emphasise their strengths and your mind can start playing tricks on you. I don’t bother, I watched one or two rounds of him, I just wanted to see if he was southpaw or orthodox. He seems to be a decent fighter, he has 70 odd fights so he is experienced. He was in with Carl Frampton and James Tennyson as well. He’s no pushover, he’s not strange to fighting high calibre fighters. You have to take every fight on its merits and give every fighter his respect but this is professional boxing and you can’t take your eye of the ball, a cut, a punch, anything can happen and you could end up having an absolute nightmare before you realise what is happening. I have to train for this like it is for a European title shot because if I fail at any of these hurdles on the way it could set me right back, if not stop my career altogether,” said Donovan.

Former world champion Andy Lee was in Donovan’s corner for his last fight in December but is tied up with other commitments at the moment so Donovan has called on another friend to help him out. Olympic silver medallist Kenny Egan has been in Donovan’s corner in some previous fights and will be again.

“With me it’s about trust and people that I know. I’ve known them throughout my whole boxing career. That’s the first thing, the second thing is that they are two quality southpaws who have achieved incredible things in the sport of boxing. I’m lucky enough and fortunate enough to get to work with them. Andy is tied up a bit for this fight but I’ll keep working with both of them whenever I can. They are there as friends but also to offer anything they can offer me. It’s a great thing to be able to tip in and receive the knowledge they have. They have their different styles, Kenny is a counter puncher, Andy was trying to teach me about educated aggression and how to fight on inside. Dom (O’Rourke) has helped me an awful lot too and he’s all about conditioning, really old school conditioning, repetition, hard work, stamina, fitness. The two Storeys from up north are with me too and they have an unbelievable amount of knowledge as well. They all have something to offer and I take whatever works for me and mould it in into my own style and do what’s right for me,” he said.

If you are lucky enough to be travelling to the Waterford IT arena on Saturday, Donovan is ready to put on a show for you as he takes another step on his journey.