Last year’s Easter Monday hero Our Duke heads the weights and the 97 entries for the 2018 BoyleSports Irish Grand National at Fairyhouse. 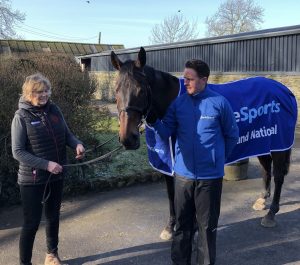 This time around if he is to complete back-to-back BoyleSports Irish Grand Nationals – a feat not achieved since Brown Lad, for Jim Dreaper and Tommy Carberry, won in 1975 and 1976 – he will have to carry the welter-burden of 11-10 to success.

Twelve months ago Our Duke, the 9-2 favourite, brought the house down at Fairyhouse when turning the famous handicap into a procession. He was among the breakaway front rank for most of the race but while his fellow front runners wilted on the turn for home, Our Duke and Robbie Power just went further and further away, eventually winning by 14 lengths. This was a notable success for the Cooper family who farm and breed from a small number of mares on the edge of the Slieve Bloom mountains in County Laois.

This year Our Duke runs off a mark of 166, 13lbs higher than his winning mark last year, but trainer Jessica Harrington says: “He has come out of Saturday’s race at Gowran Park in great shape and while the Cheltenham Gold Cup is the immediate target, the BoyleSports Irish Grand National is very much on the radar. His owners, the Cooper Family Syndicate, had the day of their lives at Fairyhouse last Easter Monday and will never forget the rapturous reception he received.”

Irish Gold Cup hero Edwulf is set to shoulder 11-08 with Outlander, runner up to him at Leopardstown at the inaugural Dublin Racing Festival, on 11-07, with Christmas Chase winner Anibale Fly on 11-03.

With €500,000 in total in the prize pot and €270,000 first prize, the race has the potential to play a huge role in the destination of the trainers’ championship. Neither Gordon Elliott nor Willie Mullins have yet won a BoyleSports Irish Grand National but they throw plenty of darts at the board this year – Elliott with the highest entry of any trainer on 30, with Mullins entering 18.

Mullins’ progressive duo Bachasson (11-03) and Total Recall (11-00) head his battalion of entries while Elliott also has the Chris Jones-owned duo Mala Beach (11-00) and Noble Endeavour (10-12), Goffs Thyestes and Sunday’s Grade 2 Ten Up Novice Chase winner Monbeg Notorious (10-10) and recent BoyleSports Grand National Trial winner at Punchestown, Folsom Blue (10-00) among his contingent. In that group of 30 is also Bless The Wings (09-09), an admirable veteran who has been runner-up in the race in both 2016 and 2017.

Noel Meade has seven, including A Genie In Abottle (10-07), while the aforementioned Harrington and the all-conquering Joseph O’Brien have three apiece, O’Brien will be bidding to add the BoyleSports Irish Grand National to his recent Melbourne Cup and Irish Gold Cup successes.

Indeed, each of the last three winners of the race have been entered with Rogue Angel (09-03) and Thunder And Roses (09-12) joining Our Duke among the entries. That Gigginstown House Stud-owned pair are trained by Mouse Morris who has an enviable record in the race having trained the winner twice (Rogue Angel in 2016, eight years after Hear The Echo) and ridden the winner once when his mount Billycan beat Tied Cottage back in 1977.

Harry Fry was out of luck with Fletchers Flyer last year but could return with the classy American (11-01).  Warren Greatrex has entered Keeper Hill (10-01) and Missed Approach (09-09), while Harry Whittington has entered Vinnie Lewis (09-08).

“The market is wide open at the minute but Thyestes winner Monbeg Notorious is seeing a lot of the early money at 14/1 having followed up at Navan at the weekend. It’ll be fascinating to see if Willie Mullins can break his hoodoo in the race this time round and he has a host of entrants at 16/1 including Invitation Only, Total Recall and Kemboy, the latter of which already has a Fairyhouse win under his belt this year.

“We are delighted to be sponsoring the BoyleSports Irish Grand National again this year and with such a significant prize fund of €500,000 up for grabs at Fairyhouse on Easter Monday, we are expecting another fierce battle for the honours in the showpiece event of the Irish National Hunt racing calendar.”

“We are once again delighted with the quality and depth of entries for the BoyleSports Irish Grand National. It is great to have last year’s winner Our Duke heading the weights along with this year’s Irish Gold Cup winner Edwulf. The race has attracted a host of this year’s top novices including Shattered Love who will be bidding for a Grade 1 Novice Chase and BoyleSports Irish Grand National like Our Duke in 2017.”