Teamwork the key for Johnstownbridge this year

JOHNSTOWNBRIDGE might have reached their first senior semi-final in almost 20 years last year but they didn’t spend their winter resting on their laurels. Instead, manager Brian Flanagan has been working on a plan how to best utilise the undoubted talent as his disposal. 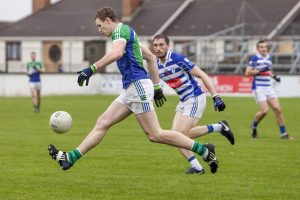 Sean Hurley wants Johnstownbridge to be less reliant on individuals this year and work more as a team
Photo : Piotr Kwasnik

And what he has come up with is to be less reliant on their star players and instead, work better as a team. When you have players of the calibre of Daniel Flynn, Paul Cribbin and Sean Hurley it can perhaps be easy to stand back and wait for them to work their magic but Hurley himself says that in order to improve they must look to players all over the field.

“We’ve relied on that down through the years, and it is a great thing to have that in your team, but what we are trying to achieve is the togetherness of a full team working together. It’s great to have players like that but if you look at Dublin, with maybe the exception of Diarmuid Connolly, it’s hard to say who their best player is. They buy into a system and team motto and that’s what we are trying to do. It’s great to have players of that calibre and that will help us throughout the year when times get tough but we want leaders all over the pitch. For us, it’s about getting that Dublin thing where no one player will win the game for us, it’s going to be about a team.

“We’ve had a psychologist in with us, Gerry Hussey. His sport is boxing and he told us that you can win a boxing match if do the most basic thing right, the jab. That’s something that something we’ve really taken on board, just to do the simple things right,” said Hurley.

Manager Flanagan is young enough to have played with most of his squad so knows them well but Hurley feels that last year was still a case of management and players getting to know how each other worked.

“It was a learning process for us and for Flanno. We needed to learn what Flanno wanted from us, to be honest he wanted togetherness and a team to work hard. In years gone by we’ve been seen as a team that when things go wrong we’ve let teams run through us. We’ve more of a plan now though. We used to play of our own accord and play as individuals but now we are playing as a unit and Flanno has really brought that unity this year. I think that unity and our game plan will make us a much more competitive team in this year’s Championship,” said Hurley.

This year Johnstownbridge’s preparations for the first round have undoubtedly been helped by having their county players available for league games throughout April. In previous seasons, having five players on the county team hampered their build up but Hurley is delighted with how this season has gone so far.

“It’s brilliant this year. I haven’t really been around the club for a few years now because I was away in Australia and then I was in America last summer so this is my first year playing for the club away from the Kildare set up. I can see it around the club, everybody is delighted to have all the lads back in because in other years we never really got to play our game plan and maybe didn’t click when the Kildare lads came back. I know from playing with Kildare before, you have a gameplan with Kildare and you take that as gospel and it can be hard then coming back to a different gameplan with your club. I think this year the lads have bought into what we are trying to do as a club and they’ve all been flying, Daniel, Cathal, Paul, Keith, and it’s great that they have played so many games for the club. We are in a healthy position, unbeaten in the league, we beat Maynooth, a senior team, last weekend and beat Clane earlier this season too,” he said.

Hurley showed glimpses of his huge talent on the way to the semi-finals last year and was a part of the DIT team that reached the Sigerson Cup semi-final earlier in the year but he says that he is still working up towards full fitness. 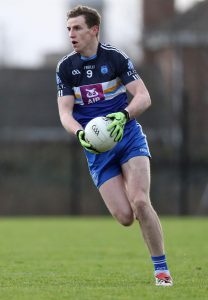 Sean Hurley in action for DIT in the Sigerson Cup earlier this year
Photo: ©INPHO/Oisin Keniry

“I’m only getting up to fitness now really. It’s been a gradual build up of fitness more so than going to do a big load of work. I’ve gradually got fitter over the last weeks and months and I feel good within myself now. Some weeks it can vary, my hip can get sore. Hopefully we can get rid of this ground, I’m a bit like a racehorse who wants the ground good to soft, I don’t like it too heavy and I don’t like it too hard,” he laughed.

“I’m still not peaking yet. We want to get this win against Confey but I don’t think we are peaking yet. When we want to be peaking is whenever Kildare are finished and the real business of the Championship starts. Flanno has given everyone a plan to work on their fitness but that will be tapered back down again once we play Confey and then we will build up again for whenever Kildare are finished or when they win the All-Ireland,” said Hurley.

Apart from a very brief O’Byrne Cup substitute appearance in 2017, it’s four years since Hurley’s last appearance in a Kildare jersey but he has so many things going on in his life that he would find it hard to imagine how he could squeeze in the commitment needed to play inter county football.

“At the moment I’m that busy it’s hard to imagine being in that set up. I’m in college in Dublin and then working as well and doing 12 hour shifts and there is studying for exams too. With everything I have going on I don’t think I could be an inter county player right now, they give so much. This time of the year when they are coming into the summer and are going to be playing at Croke Park, it’s a great time of year to be with Kildare but at the moment I’m that busy with work, club and college that I don’t even think about it. I’m just trying to keep my head above water in all aspects of my life right now,” he said.