IT might be clichéd to say that the newly named Pittman Traffic & Safety Intermediate Football Championship is one of the most difficult around to call but if it is clichéd that is only because it is true. 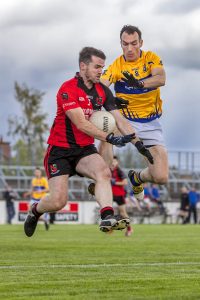 Another cliché is that anything can happen on the day and it’s true to say that most of the teams in the Championship are capable of beating any other team on their own day but to me, I see three teams slightly ahead of the rest.

I would expect one of St Kevins, Two Mile House or Clogherinkoe to be left standing by the time the dust settles next October.

Kevins made the semi-finals in 2016 in their first year back in intermediate and were only beaten after a replay by Two Mile House and then narrowly lost a quarter-final last year to eventual winners Raheens.

The fact that St Kevins are playing in Division 1 has to give them an edge, even if they have lost four games in a row since a very creditable opening round win against Confey. They are the only intermediate side playing football at the top level so even in losing games they are picking up valuable experiences. Conflictions with Coill Dubh hurlers may cause problems down the line with a big overlap of players but in Barry Noone they have one of the most reliable scorers in the grade. Players like Jason Brosnan, Tom Barron, Mick Kenny and Mark Grace have been around the block and know what it takes to win and under the management of Mark Fitzharris it will have to be a very good side to beat them this time around.

That good side could perhaps be Two Mile House. Although  they would dearly have loved to win this Championship in 2016 when they were just seconds away from doing so, the experiences gained since coming up from junior means they can’t be overlooked. The return to form of Peter Kelly at intercounty level must have their supporters drooling while no defender will fancy marking Chris Healy. The likes of Aidan Casey and Shane Darcy still play crucial roles while newcomer Didier Cordonnier has been a good addition and he has a great knack of kick long range left foot frees. It’s only senior teams Maynooth and Castledermot that have beaten the Niall Browne managed team so far and they landed something of an early physiological blow by beating Clogherinkoe last weekend.

Clogherinkoe have endured an up and down season so far and have taken a couple of pastings from Clane and Maynooth but have also secured good wins against Castledermot and Monasterevin. The appointment of Ronan Quinn as manager was a major coup of he will know how to get the best from some of the classy young players as his disposal.

Just outside that trio are the likes of last year’s beaten finalists Kilcock, Monasterevin, Rathangan, Ellistown, recently relegated Allenwood and maybe even Kilcullen who be targeting a better run than last year.

As always these games will be fiercely contested and the four games down for decision this Sunday should be especially worth watching.

JUST the three games in the Tom Cross Junior Football Championship this weekend but we might get an early indication of how things will work out when Rheban meet Caragh on Monday afternoon. 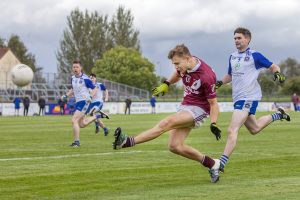 They are two sides who have gone close to get out of the bottom grade in recent years and they will be pushing hard again this year.

Robertstown are another who won’t be easily beaten and they are involved in the first junior tie of the season on Friday evening against Ballykelly.

As the only side in Division 3 Milltown, who remarkably have had four draws in six games in that division, are probably the slight favourites to win out this competition but they can put the feet up this weekend see their rivals in action before they are out against Grange the following week.