AFTER reaching the quarter-finals in 2013 and 2015 and then finally making the breakthrough to the semi-finals for the first in 2016, Confey looked as well placed as any to break break the stranglehold that the Newbridge duo of Moorefield and Sarsfields currently have on the Kildare Senior Championship. 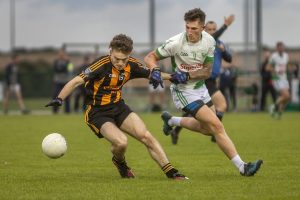 David Slattery in action for Confey during last year’s Round 3 tie against Round Towers
Photo : Piotr Kwasnik

So last year’s showing, bowing out in the third round after a replay to then Intermediate Champions Round Towers, was a little disappointing.

But the team are under a new set up this season with former manager Davy Burke moved on to the Kildare Under 20 team and they have made a very solid start under new manager Fergal Foran. After managing Na Fianna in Enfield for the last two years, just a few kilometres away from Johnstownbridge on the far side of the Meath border, Foran will know all about Friday’s opponents and Confey’s star player, David Slattery, is delighted with how Foran has taken to his new role.

“The new management have settled in well. It’s always nice to freshen things up. Every player has a fresh start and an opportunity to impress. Davy Burke did a terrific job with us and moved onto bigger and better things with the Kildare U20 Management role, but we’ve found a good replacement in Fergal Foran. Fergal is an old school manager and allows us to just play football. It seems to be going well so far,” said Slattery.

Although their league campaign started with a surprise defeat to St Kevins, Confey have won four of their five games since, only losing county champions Moorefield.

Johnstownbridge are also showing excellent early season form, albeit in Division 2, and the meeting of the two teams has the potential to be the best game of the first round of Championship. The teams met in the 2015 quarter-final when a goal inside the opening ten seconds by Daniel Flynn helped Johnstownbridge to a 1-10 to 0-9 win. Slattery knows all about the talents of his intercounty team mates but says that friendships will be put on hold for 60 minutes.

“Confey have always found it tough against Johnstownbridge, they a terrific team with some very talented players. Friendship goes out the window until the final whistle is blown, as anyone would tell you when you play football. It’s no different than playing challenge games or training matches, you want to come out on top,” said Slattery.