THE new format means there is not as much significance on the opening round of the Championship but that won’t stop teams going hell for leather to try get that all important win. GER MCNALLY looks ahead to what should be some intriguing ties.

THE semi-finalists in the last two years have been Moorefield (twice), Celbridge (twice), Athy, Sarsfields, Confey and Johnstownbridge so the meeting of two of those teams in the first game of the weekend is certainly one to whet the appetite. 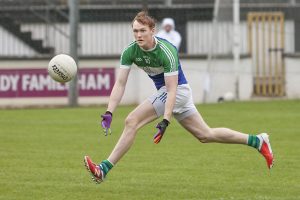 Johnstownbridge’s position as a Division 2 team is definitely a false one with relegation suffered after a season spent without many of their star players. At full strength, they are a match for anybody, as they have in their league games by romping to six wins in a row, including victories over senior teams Clane and Maynooth. The likes of Daniel Flynn, Cathal McNally, Paul Cribbin and Sean Hurley need no introduction and are all matchwinners in their own right.

Their opponents are no slouches though. With manager Davy Burke departed to take a job managing the Kildare U20s, Fergal Foran has taken charge following a two year spell with Na Fianna in Meath. The pace of David Slattery is something that Johnstownbridge need to be wary of and Hugh Lynch and James Gately are strong and experienced campaigners. They won’t be found wanting in defence either with Colm Chan and the Jennings brothers always solid.

In the absence of a real stand out tie in the opening round, apart from Moorefield v Carbury, this game has the potential to be the best of the weekend. Johnstownbridge’s stars might just edge them to victory but it will be a very tight game.

THINGS have picked up for Castledermot in recent weeks in Division 2 but this does have the potential to be one of the most one sided games of the first round. Although they have beaten Intermediate Championship contenders Two Mile House and Kilcock in the league, as well as drawing with Allenwood, Castledermot have been beaten by Clogherinkoe, Maynooth and soundly hammered by Johnstownbridge. 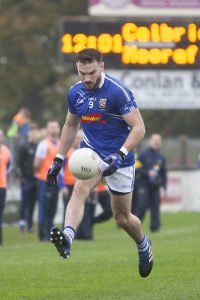 Despite their implosion in last year’s final against Moorefield, Celbridge are once again serious contenders this time around. They have been inconsistent though in the league so far and fell to a shock defeat last weekend against Raheens.

Still, the difference in the two team’s firepower is telling and that should be enough to get Celbridge up and running this season.

IT is a pity that Neil Flynn is missing this weekend due to his persistent hamstring injuries because he would have given the Athy defence a serious test. With him, Maynooth are a very potent side who could trouble most teams in the Championship but without him they are likely to struggle for scores.

Athy’s own injury worries eased last week with Niall Kelly scoring two points in a draw against Naas after coming on a substitute. We might have to wait to see newcomer Cathal McCarron make his Kildare Championship debut as he is unlikely to feature because of a training camp with Tyrone. He is a big addition for Athy and will be hugely influential in the latter stages of the Championship but his absence won’t be felt this weekend and Athy will have more than enough in their armoury to get the win.

A repeat of last year’s first round tie when Clane caused something of a shock to overcome the Larries.

These are two teams a long way short of previous glories but two teams who have pressed the reset button and are building again through their young players.

Clane finally got their hands on a minor title last year after losing the previous two finals and that was such a feat that the manager of that team, Mick Culhane, has taken over the senior team. It might be a little early to introduce many of that team but after reaching three minor finals in a row, there is sure to be youthful look to a team who have performed capably in Division 2 so far.

St Laurences had a huge win last week in Division 1, beating St Kevins for just their second win of the season. That will give them a massive boost going into this game and under the management this year of Brian Kelly they will be confident on an improved showing from last year.

WE have been waiting for Naas to make a real impact at senior level for a number of years now and the recent dominance in Kildare at underage level only adds to the feeling that their time is coming. There was definitely more of an edge to them under Declan McCabe last year but they still went down all too easily in the quarter-final against Celbridge. Talent is not in short supply in Naas but until they show that they can produce in crunch moments, and you could almost the same for all the teams in Kildare apart from the Newbridge pair, then doubts will persist about their mentality.

Round Towers are not the best team in the Championship but you can be sure that they won’t roll over and anything that Naas get on Saturday evening will be hard earned. Glenn Ryan’s team performed well last year in their first year back in senior football and pushed Athy hard in the quarter-final for at least 40 minutes. Judging Towers by their league form suggests a very inconsistent team. They lost to Celbridge by a point but then beat Carbury. They were well beaten by Athy but bounced back to beat St Kevins by six points. Their most recent game though, an eight point reversal at the hands of Leixlip doesn’t bode well and Naas certainly start this game as favourites.

A tie between two teams who will consider it a successful championship if by the end they are still a senior team for next year.

They met at the same stage in 2016 and Leixlip were easy winners and the fact that Eadesown needed to win each of the last two relegation finals suggests a struggle again.

However, there is a different feel to Eadestown this year. With his time with Kildare now at an end, Emmet Bolton is available full time to his club and manager Philly Wolfe has settled into role in his second season and is getting a nice tune out of his squad.

They have won all five league games this year but it can’t be overlooked that there is a huge gulf between Division 3 and Division 1 football, no matter what the results.

Leixlip had been finding it very difficult recently but a win last weekend against Round Towers will do wonders for their confidence and comes at the perfect time ahead of Championship.

This is a tricky tie to call but I fancy that Eadestown might just surprise a few here.

KILDARE and Leinster champions Moorefield begin the defence of their title with a potentially tricky tie against Carbury. The Sean McLoughlin managed team might not be at level there were at when they reached consecutive finals in 2011 and 2012 and might not be in the top four or five teams in Kildare but they are at the very top of the next bracket of teams. 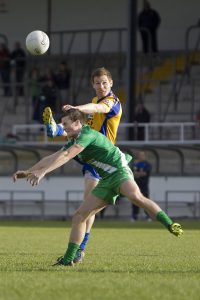 In Eoghan O’Flaherty they have one of best club players in Kildare over the last decade or so and somebody who is always capable of running up a big tally. They aren’t one man team but when he was struggling with an injury last year in the Round 3 tie against Naas they didn’t really have anybody else to stand up and shoulder the burden. They have some hugely talented youngsters but it might be another couple of years before they can really show what they can do at senior level. It will be interesting to see how county back up goalkeeper Aaron O’Neill fares if he features out the field.

Despite their shortened pre-season due to last season’s heroics, Moorefield still start this Championship as favourites, in my eyes at least. Looking through other teams, I see their talented players and admire their footballing ability but Moorefield’s strengths are all based around their mentality. That’s not to take away from what they do on the field because they obviously have some outstanding footballers but so do many teams in Kildare. What sets Moorefield apart is their mental strength, their composure under pressure and knowledge of how to win football matches. The only team to come close to consistently matching that in the recent past is Sarsfields. Carbury may or may not catch Moorefield on the hop this weekend but when the real Championship starts later in the year they remain the team to beat and it’s up to the numerous other groups of talented players to show that they can produce in the big moments in the way that Moorefield have.

Daniel’s Back For Royal Clash