CAPTAINING your country at a World Cup can be a daunting task at the very best of times, but for Naas native Billy Dardis, it is something that he is prepared to embrace with open arms. 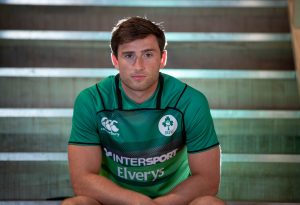 When Ireland take on Chile at AT & T Park later today in a Pre-Round of 16 encounter at the Men’s Sevens World Cup (3.35pm local time/11.35pm Irish time), it is the former Leinster Academy star who will lead Anthony Eddy’s charges into battle.

Despite having previous experience at schools rugby level with Newbridge College and Terenure College, Dardis had never captained an Irish side at any grade. Though he doesn’t consider himself to be the most vocal of players, his desire to lead by example has helped him along the way.

“I captained Junior Cup [Newbridge] and Senior Cup [Terenure] teams a little bit. In terms of representative honours, it was the first captaincy I got. I was real nervous before I got told. Obviously when I got told, it was unreal,” Dardis remarked at last week’s squad announcement on Dublin’s Henry Street.

“I was delighted with it. It’s just a nice honour to have. Since then, it has just been about how I can do it to my best and lead the lads to the best of my ability. One of my things would be just the unseen things. I’m not the biggest person in the world, I’m not the biggest, loudest person. Going into a World Cup is, I suppose, real special.”

While a number of players have drifted away from the squad in recent seasons, there has been a sense of continuity to the squad in the lead-up to the tournament. This has helped to build unity within the camp, even though there are still some defections within the system.

“This year we’ve had a core group. It has been about 12 or 15 of us that have trained throughout the whole year and gone to a lot of the tournaments. We’ve had a good few lads come in, have a shot at it.

“They might not have gone well, but other lads have come in and made a big impact, and they’ve stayed part of it. There is a core group, but it’s kind of changing the whole time.”

After he was released by Leinster last summer without a senior appearance to his name, the then 22-year-old was at something of a crossroads in his career.

Although he had a number of options available to him, his previous exposure to Sevens made it a “no-brainer” for Dardis to get involved in the code on a more permanent basis.

“The IRFU have always been good to me and I’ve been part of loads of 18s, 19s, 20s set-ups and I knew a lot of people and spoke to a lot of people. They gave me good advice and they were just like ‘yeah, go for it.’

“I’d spent four years in the [Leinster] Academy, hadn’t got a cap. I was kind of banging my head against the wall and I was like ‘I need something to refresh my mind’. They put forward to us what the plan was for the season. The potential to push on into a World Series was just really exciting.”

Indeed, despite his ambitions to one day return to 15s on a professional basis, the UCD club man’s sole focus is on establishing Ireland as a top-tier nation on the Sevens circuit.

“In my head, I’m still an 18 year old kid and my dream is to play for Ireland, obviously. Whether this is a stepping stone or what I do for the next five, ten years, I don’t really know yet. At the moment it is what I’m focusing on.

“There’s no point in trying to half-ass a few different things. You’re better off just focusing on one thing. If I get an offer, I’d consider it, but at the moment [Sevens] is what I’m focusing on.”

Should Ireland get the better of Chile, they will then advance to face South Africa in a Round of 16 affair in the home of the San Francisco Giants.

However, as he recalls the meeting of the two sides at last year’s Octoberfest, he realises the South Americans are not to be taken for granted.

“It was a tough game, we played them third game on a Saturday evening. It was just intense. They’ve a few big ball carriers and a lot of pace as well. Little small speedy fellas, but they’ve changed a lot since then.

“They’re a good side. We won’t be able to look past them at all. Some people are saying ‘you’ll get a shot at playing whoever after them’, but I think we’ll just have to focus on that. They’re going to be a big challenge,” Dardis added.