IT’S not often that Moorefield play the role of underdog but that is exactly what one of their players will be doing for the next few weeks as the hit television show The Underdogs returns to TG4 after a ten-year absence. 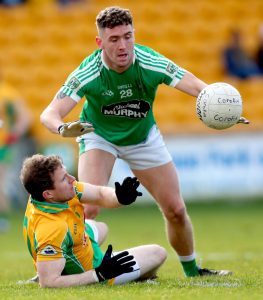 Anthony Durney in action for Moorefield against Corofin in the All-Ireland club semi-final Photo: ©INPHO/James Crombie

The show is based around the best players from around the country who haven’t played Senior Championship for their county coming together to form a team with a view to taking on a county team in October.

The first episode airs on Thursday night at 9.30pm and shows how Anthony Durney made the cut, although the hard working wing back admits that he has his girlfriend Devon to thank for even applying in the first place.

“We were sitting down watching telly one day and I was just scrolling through Facebook and saw a link for it. Unfortunately I’m a bit older than some of the lads so I can remember when it was on ten years ago and I said to the girlfriend that it would be a good show to watch when it comes out.

“I explained to her what the show was about and she asked why I didn’t apply for it, I wasn’t too keen initially but she sat there and spent an hour filling in the application form. I only realised she did that when she told me that I had to record a ten second video clip to go along with it.

“A couple of weeks after that I got an email saying I was successful and that there were trials in either Trim GAA or Celbridge GAA club. The date for Trim suited me better. At the time of going to Trim, I didn’t know the selectors or anybody who was going to be there, I was just going in blind.

“There were about 40 or 50 lads there, the cameras were there and we had to do a few interviews. We met the selectors after that and we know now that they are Paul Galvin, Ray Silke and Valerie Mulcahy. They took us for light training and then a match and we were told that from the 40 whatever players that were there, only 12 would be picked for the next stage of the show.

“We played the game and afterwards they called the 12 lads forward and I was lucky enough to get through that stage,” said Durney.

Durney then made it through the next phase of trials in Abbotstown to make the final cut and has really enjoyed working with the three selectors so far.

“Paul Galvin is a legend of football and he is somebody that I would have grown up looking at as a footballer. I didn’t really know much about Ray Silke at first but looking back over it, I was at the All-Ireland Final in 1998 as a child and he captained Galway that day. I know more about him now and he’s let me know that he is a Corofin man and we’ve had a bit of a joke about it. He’s been rubbing that in a small bit after Corofin’s win over Moorefield earlir this year. Valerie Mulcahy has won ten All-Irelands too,” said Durney.

The most nerve racking part of the show so far was in Abbotstown when the players found out whether they were in or out.

“It was nerve racking going up because they don’t give much away and you don’t know if you’ve done enough to get through. There are some very good lads in there but thankfully they seemed happy with me and wanted me to be part of the panel,” he said.

That was a great feeling, especially as he wasn’t sure that he would even make it past the first stage.

“After the first trial game, I didn’t feel I did enough. Trial games are different, it’s cut throat because everybody wants to impress. I’m delighted the selectors looked outside the box, they were just looking for the lads who scored six or seven points. Paul Galvin said he was looking at the lads who were making the honest runs and were tracking back. He made it clear that he was looking for honesty and that they were looking to build a team,” said Durney.

The Underdogs show is perhaps best known for helping launch the intercounty career of Kieran Donaghy and even at the age of 28, Durney hasn’t given up hope that the show could help him gain a call up to the Kildare squad.

“Maybe, you never know,” said Durney when asked if he thought the show could help him start a Kildare career.

“Paul Galvin has said to us that if he was on this show he’d thinking that we will be playing on a big stage that county managers will know about in October. He has told us that if we impress then it will be hard for the county managers to overlook us. Who knows though? I kind of missed the boat, I gave up football for a few years and looking back now I kind of regret that I didn’t put the effort in when I was younger. This is an opportunity to prove to myself that I am good enough to play at this level and who knows what will happen, you are never too old to get a call up if they see you are committed and think you could add something to the panel. I’d say a lot of lads on the show have those aspirations. Myself? I’m kind of half and half, if I get a call up then happy days but I’d be happy enough to prove to myself that I can be competitive and mix it with these top quality players,” he said. 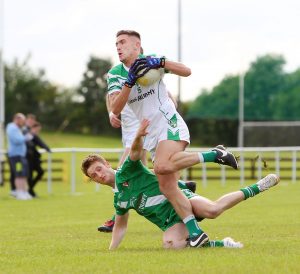 In many ways, Durney is perfect for the show because in football terms, he is something of an underdog himself. Back at the start of 2016 he hadn’t played Senior Championship for Moorefield but less than two years after making his debut, he was lining up for his club in an All-Ireland semi-final.

“I had kind of given up football and it was Kenny Duane who came to me in 2016 and told me to get up training and that I was a good player who could be a good asset to the Moorefield team. Thankfully he did. I put the effort in and got on the team and we made it to the county final that year before losing to Sarsfields,” he said.

Durney then missed the run to Kildare glory in 2017 after being stationed in the Lebanon as part of his job with the Defence Forces but he was back later that year to help the push for Leinster glory.

“I didn’t get the chance to win the county title with the lads and put the year before to bed but even when I was overseas Ross was texting me and telling me that I better be training because he wanted me back. I got home then when the group were training for the game against Portlaoise. I put the head down but I knew it was going to be hard to get into the team at that stage because the boys were absolutely flying and I was just happy to be there and be another body to help out at training. Ross was happy with me and the way I was training and I was unlucky maybe not to get a chance but I kept training hard and then got my chance against Corofin in the All-Ireland semi-final. Unfortunately, that didn’t work out and we were a kick of a ball away from getting to Croke Park,” he said.

Although this show will take some commitment, Durney insists that it won’t get in the way of him trying to help Moorefield retain their county title and if everything goes well for him, his ideal October would see him line up for the Underdogs team and in a county final for Moorefield within a few weeks of each other.

“I made it clear to Ross that the club comes first and it’s the same for everybody on the panel and the selectors on the show know that too. It’s hard to mix both but they understand that we are playing at a good level, they know Moorefield is a high standard so they are lenient if I can’t make it on certain days because of Moorefield. Ross knows that and he is under no illusions that Moorefield are coming first,” said Durney.

As for the show this evening, Durney will be as much an interested spectator as everybody else when tuning in.

“I haven’t a clue what it is going to look like and I’m looking forward to seeing how everybody is portrayed. There might be things said by the selectors about lads that they don’t think now. Lads have progressed to different levels since the trials and it will be good to see what they said behind closed doors at that time. I don’t know what way it will come across but I think it will be a good watch for anybody interested in GAA,” said Durney.

*The Underdogs is screened on Thursdays on TG4 at 9.30pm