Robertstown on course for JFC semi-finals but who will join them?

AFTER Milltown and Rheban were confirmed as the qualifiers for the Junior Football Championship semi-finals from Group A last week, Group B will be settled this Thursday evening. 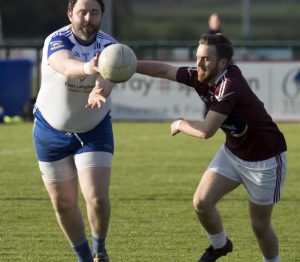 Robertstown have racked up dominating wins so far against Ballykelly and Castlemitchell and anything other than a repeat of that against Cappagh to complete a 100% record in the groups would be a big surprise.

That would then leave Ballykelly as favourites to join them in the last four, and a win or draw against Castlemitchell would guarantee that but a Castlemitchell win would most likely open the door for Cappagh to squeeze into the semi-finals. Making the semi-finals would be a big achievement for Ballykelly in particular as they haven’t been back to a semi-final since their relegation from Intermediate in 2011