Ball determined to bounce back after horror injury

BEING named as goalkeeper on the Minor Football Team of the Year this week should have been the personal highlight of John Ball’s young career but instead, the news is just something to lift the unfortunate Clane man’s spirits after he suffered an horrific leg break last week. 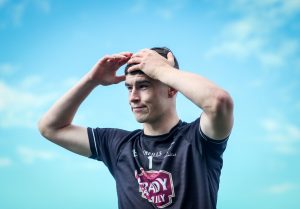 John Ball’s brilliant performances this year for the Kildare minor team have been recognised by being named as goalkeeper on the Minor Team of the Year but his main concern at the moment is to recover from an horrific leg injury
Photo: ©INPHO/Oisin Keniry

Although ranked as the best minor goalkeeper this year, Ball actually plays outfield for his club and it was while playing in the Minor Championship against St Laurences in Raheens last Tuesday that disaster struck.

“I was in midfield, going up for a kickout and whatever way I landed their player landed on the back of me, broke the leg and the bone came out through the skin then,”  said Ball.

Thankfully, help was quickly at hand.

“One of the lads on the team, his mam’s boyfriend is a fireman so he was there and helped the situation a good bit. The ambulance came about 15 minutes later so it wasn’t too bad,” said Ball, who now fears he may be out of football until May or June of next year at least.

Still in Tallaght Hospital over a week after the injury, his thoughts have already turned to making his comeback.

“It’s something that I’ll aim for, to get back stronger than I was. I’ll need to as well, it will nearly be scary going back because I’m sure it will still be on my mind, not for life but just for the first few games it will be hard mentally. But look, many people have come through these kind of injuries, mine is nearly identical to (Galway midfielder) Paul Conroy’s as far as I know.

“I’m on crutches now and getting used to them but it goes from no pain to a lot of pain so I’m just taking it easy at the moment,” said Ball.

The timing is particularly unfortunate for Ball. After having such a good year for Kildare, he was doing well for his club and after winning their three group games, Clane are looking in a very strong position going into the last eight of the Minor Championship.

“We are going well with the club, I was playing decent enough and we are in the quarter-finals so it’s unfortunate but I just have to put it in the past now and focus on the recovery and build for the future,” he said.

At such a low point, Ball needed a pick-me-up and it came this week with the news that he won the Minor Championship’s equivalent of an All-Star for a string of wonderful performances between the posts for Kildare.

“I won the player of the week at one stage but we only made it to the quarter-finals so I thought that the other four goalkeepers would be ahead of me, especially as some of their games were on tv. I had half ruled myself out so especially after the injury last week it was a nice little perk up to get that news,” he added.

Few would argue that the award wasn’t thoroughly deserved. Some of the highlights of Kildare’s run to a Leinster semi-final were Ball’s saves and were it not for a couple of particularly spectacular saves in the drawn semi-final against Wicklow and most especially during the replay in Aughrim, it’s unlikely that Kildare would have even made the final.

Ball, though, is very modest when talking about his performances.

“You just try to play your part as best you can but I’d throw away the All-Star to have a Leinster medal for the lads,” he said.

Far from being a regular goalkeeper, the position is something that he has fallen into in recent years.

“I never played in goal for the club until maybe two years ago. I played a bit in goal for soccer and then I played a bit in the school for Padraig (Carberry, Kildare minor manager and teacher in Ball’s school, Scoil Mhuire in Clane. When the trials came around there was a bit of a struggle for goalkeepers, Padraig called me in and I’ve been there ever since.

“I always loved playing outfield but playing in goal gives you a different view of the game and it was something I did enjoy, especially in the last two years. From the Carlow Cup, to the Fr Manning Cup last year to the run we had this year, I very much enjoyed it,” said Ball.

For now though, the talented teenager has more mundane worries and even when he does eventually leave hospital, it will be some time before he is able to return to school.

“I’m going into fifth year this year. It will be tough coming back there too but there are a lot of things to do and to worry about before going back to school,” he said.