THE surprise packet of this year’s KDFL Lumsden Cup, Garryhinch, have been handed a tough assignment in this year’s semi-final after they were paired with reigning champions Suncroft at the draw in the Keadeen Hotel on Wednesday evening.

The Division 2 champions are the only team left in the competition from outside the top division and already caused some shocks by beating the likes of Galhoy and Athy Town en route to the last four and their manager Gerry O’Brien is delighted that they have managed to get so far.

“It’s our first year so we are delighted to be here, we only started up in January. This has been a brilliant year for us, we’re all in football for years but this is a new start for us. We won our league, in the final of our divisional cup and now find ourselves in the semi-final of the Lumsden Cup, it’s just brilliant,” said O’Brien of the Portarlington based side. 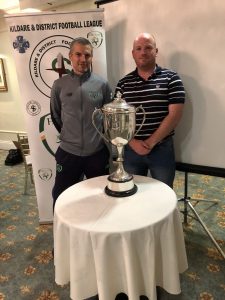 The draw has been particularly unkind to Garryhinch after they were paired with champions Suncroft. Last year they became the first team to win a Senior Division and Lumsden Cup double and although they have lost their league title to Monread, they are gunning to become the first side to retain the league’s flagship cup competition since Coill Dubh in 2010 and 2011.

“The lads can’t wait to hopefully get through to the final. We put a big effort in last year to make it one of the best finals ever. We just try our best every year,” said club secretary Brian Vardy.

Despite that, Suncroft had a real fright in the quarter-final when Rathangan took the lead with just ten minutes to go but goals by Kieran Morris and Dan Connolly steered the Neil Barnby managed side through. 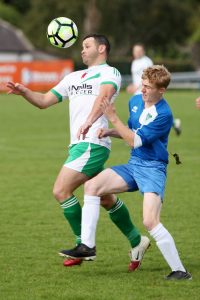 “We were missing a few lads for the quarter-final so it was good to dig out a result, especially after going 1-0 down with ten minutes to go. We scored two fine goals to win,” said Vardy.

Suncroft hosted the final for the first time last and the Community Grounds will once again be where the final is played, on 13 October, and Vardy is promising that whether his club win through on not, they will once again put on a good show.

“Hopefully we’ll be there ourselves but whether we are or not, hopefully the final will be even better than last year,” said Vardy

The other semi-final should be an absolutely cracking encounter after two of the most consistent teams in this year’s Senior Division were paired together.

Ballycane Celtic and Clane Utd have both enjoyed excellent seasons and are currently vying to potentially finish third in the league.

As well as their fine league campaign, Ballycane have also shown superb form in the cup. Quite simply, they have had to. They were paired with local rivals Naas Utd in the first round and then became the only team this season to beat Monread, in another local derby, before travelling to Athy in the quarter-final to take on another unbeaten team, Premier Division champions Clonmullion. Ballcane’s Kevin Higgins agrees that they have had the toughest run to the semi-final.

“We probably had the hardest run in the Lumsden Cup. In the first round we played Naas Utd, Naas and Ballycane is always a big derby. Then we had another derby against Monread, another big  game. We just about got the better of them to end their unbeaten run. It was no easy task going down to another unbeaten team, Clonmullion, it was just a matter of digging in.

“There is a new manager this year and he is after putting a lot of belief into the players. We went on a good run there at one stage, went nine or ten games unbeaten and that was exactly what we needed,” said Higgins.

Higgins is one of a number of players on the team who were involved the last time Ballycane reached the final, they lost to Kilcullen in 2005, and they have had to wait a long time for another shot at lifting the trophy.

“I still remember that night, it’s horrible to lose the Lumsden Cup final because they don’t come around too often,” he said.

Although not quite as long as Ballycane, their semi-final opponents Clane have also have to wait a while to make up for a final defeat. They were beaten in the 2010 final by Coill Dubh as their chairman David Patchell remembers.

“This is a big competition to try and win, for the last 20 years for us, that’s how important it is. The last time we got to a final was 2010 and we were just pipped that day by Coill Dubh, 1-0. That’s the closest we’ve come to it. There are three other great sides left in the competition but on our day we think we can give anybody a game so we are really looking forward to it,” said Patchell.

Like Ballycane, Clane needed extra time to get through their quarter-final, eventually beating Liffey Celtic 4-2. 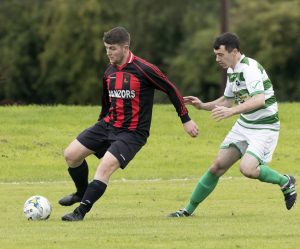 “Liffey always put it up to us, no love lost between the two clubs and it’s always a good battle. They were right in it, we were 1-0 down and came back and it was 2-2 and then we pipped them in extra time,” said Patchell.

It’s been a fine season so far and Clane would now dearly love some silverware to round it off.

“The lads have worked really hard. It’s our best season so far since we’ve been in the Senior Division, hopefully we’ll finish fourth.

“We’ve got a few younger players in, a good centre forward, a good back up with our second string who are also having a good season. All round, it’s important to start well and momentum keeps you going. We started well and that’s kept us going. We had not too many injuries. We were unlucky in a couple of games and maybe could have finished even higher but we’re really, really happy with how the season has gone,” he said.