AFTER an intercounty season spent at full back, David Hyland has relished a return to his club and a chance play further out his field. Hyland’s rampaging forays into attack have surely been noticed by Cian O’Neill and if he could unearth another number 3 then surely Hyland would unleashed from that more restricted defensive role for Kildare too but for now, Hyland is just happy to influencing games higher up the field for his club. 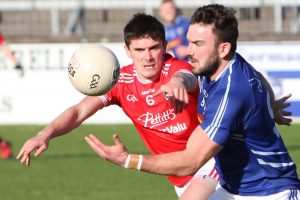 “That’s where I enjoy playing the most,” said Hyland.

“I played all my underage football playing out the field, in the half back line, midfield, I feel I am a better footballer out there. I’m definitely really enjoying myself out there at the moment,” he added.

Hyland has featured mainly in the half back line for Athy this season but was moved into midfield for the semi-final against Celbridge. The men from the north of the county arrived in the last four on the back of some superb midfield displays from Fergal Conway and Kevin Flynn but with Hyland detailed to look after Conway, and Paschal Connell on Flynn, Athy got the edge in that crucial area of the field.

“Anytime you go to war with Paschal it’s good. Paschal is a real workhorse and he leaves everything out on the field, I got the easy job to pick up the pieces after Paschal. In a degree, that was like playing in the full back line in that you’re going out to do a job on a man and you have to do that first and foremost, then you can look after the attacking side of things after that,” said Hyland.

That area of the pitch is going to be a key battleground on Sunday once again. Athy have so many options around the middle that Hyland may yet be positioned elsewhere. Moorefield are likely to start with Aaron Masterson and Daryl Flynn in there but they have others who can influence the game in the middle third.

Still only 24, Hyland was one of the new breed of players tipped to lead Athy into a period of dominance when they won the 2011 county title but things didn’t pan out that way and Athy have suffered a number of hard to take defeats since then.

“It hasn’t worked out like that, that’s why we are cherishing this at the moment. You are always told at a young age that it won’t always work out like that and that soon came to reality when we didn’t win another title in 2012, 2013 and so on. We are not in a county where one team wins nine, ten titles in a row, it’s so competitive that it is always going to be like that,” he said.

Hyland is used to returning to the club scene after an intercounty scene and he feels that the lessons learned from the past have helped him and his Kildare team mates settle back into life with Athy much more fluently.

“It’s something we put a huge emphasis on this year. Last year, we lost with Kildare to Armagh on the Saturday and then were back with the club on the Tuesday and Thursday and went hell for leather straight away, probably because we were so frustrated with the way things went with the county.

“This year, the manager told us to take the week off before the league final. We got the break then and had another night or two off heading into the Championship as well. The management were very good about integrating us back in and what was fit for purpose,” said Hyland.

Hyland is typical of many with Athy in that his family are totally ingrained into the club. His younger brother Mark has continued to develop along nicely with club and county and their parents are staunch supporters of all that they do.

“My poor mother and father don’t get a weekend to themselves, they are always out watching matches or bringing somebody to training or something like that. Mark is flying this year so it’s great for them to get in behind both of us, and I have another brother gone back to New Zealand. He left three months and said he was raging because he said he knew then that Athy would make the county final, he foresaw it so hopefully we can build on that and maybe give him something to come to in December,” he said. 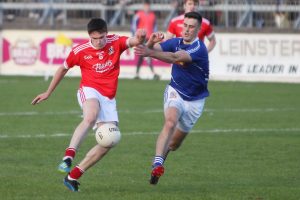 Hyland gets a shot away during Athy’s against Celbridge despite pressure from his intercounty team mate Mick O’Grady
Photo : Piotr Kwasnik

Hyland is now based in Dublin during the week so is slightly removed from the excitement that is building around the town this week but he feels that the build up is something the players should embrace.

“I’m living in Dublin during the week so I’m only knocking around the town on a Saturday and Sunday so I get the best of both worlds. I love the vibe among the lads, I’m just really looking forward to it, hopefully we can express ourselves because that’s what we’ve been doing and why we are going so well, lads are playing with a bit of abandon but sticking to a system at the same time,” he said.

Athy have beaten the other two sides of the top four teams in the county, Sarsfields and Celbridge, to reach the final but Hyland knows they will have to go new heights to get a result on Sunday.

“We are under no illusions about the task in store. I went to all their Leinster Championship games last year. They are the team that a lot of teams around Kildare aspire to be and if we can take a leaf or two out of their book and build on that for the final then we’ll be happy enough.

“We know there is a huge mammoth task ahead of us, Moorefield are Leinster champions, they have the experience and they have coasted through the Championship so far. We just have to prepare to the best of our ability and then whatever happens on the day, happens on the day,” said Hyland.