IN the build up to Sunday’s county final, Moorefield manager Ross Glavin feels Athy are the team that most GAA supporters around the county want to see on the steps of St Conleths Park after the final whistle – but that is something that his team will use to drive them to even greater heights.

Moorefield manager Ross Glavin gave his thoughts on a wide range of subjects ahead of Sunday’s SFC Final against Athy
Photo: ©INPHO/James Crombie

Athy were the last team to bring the Dermot Bourke Cup out of Newbridge back in 2011 and Glavin feels that Kildare GAA supporters are sick of the dominance of Moorefield, and their neighbours Sarsfields, but they are no mood to relinquish their crown without a serious fight.

“There is a kind of atmosphere outside of Moorefield and around Kildare – a lot of people don’t want Moorefield to win this title. That’s something that drives us on. People think that because we’ve been in finals before and won trophies that they don’t really want us to win this title. Moorefield don’t have a huge contingent of county players on the county and people are possibly saying that Moorefield have a negative effect on the county team because of Moorefield’s dominance. We feel that people want Moorefield to lose, that’s something that drives us on, we want to prove those people wrong and show that we are worthy champions. It’s not easy done and if you look around Ireland I’d say less than 50% of the 2017 champions will have retained their title, it’s a very difficult thing to do,” said Glavin.

Despite what anybody may or may like, the stats show that when Moorefield reach the final they generally win. Since reaching the 2000 final, they have played in 11 and won eight of those, the 2009 defeat to St Laurences the only loss not against Sarsfields but Glavin is taking nothing for granted and feels the battle to dictate the tempo of the game could be a huge factor in deciding the result.

“We are under no illusions, we know are playing quality opposition. They are a very smart football team, they get a lot of bodies back behind the ball. That smartness though sometimes comes down to tactical fouling, they’ll try to slow the game and maybe have a few injuries off the ball to slow the pace of the game down, try to foul us high up the pitch. It’s a dangerous game to play with that kind of tactical fouling because it’s borderline on cynical but we will try to keep it as free flowing as possible and try to keep the pace of the game high,” said Glavin.

Moorefield are used to dealing with the pressure of being the side with the target on their backs as they go around the county, but also with the pressure that comes from within their own club. As the mind games before Sunday ramp up, Glavin suggested that it is now up to Athy to deal with those sort of pressures.

“It’s going to be a tough game, Athy have come through the tough side of the draw and they are league champions but being league champions, there’s pressure with that, a pressure and expectation from the people of Athy. A lot of people around Kildare too will say that Athy have some of the best county players in Kildare so they should beat Moorefield on Sunday. After beating us in that league final, I think a lot of people will be feeling the pressure but it’s up to Moorefield to set the tone early in this Championship match and put more pressure on that Athy team,” said Glavin.

Moorefield had some difficulties earlier in the season as they adjusted their training schedule following their extended 2017 season but Glavin feels that his team are well over that now and coming towards their peak once more.

“We’ve been on upward curve throughout the year. We probably plateaued a bit during the summer, probably took the foot off the pedal a bit on the training ground, just to give the lads a mental and physical break after such a long year last year. I suppose it’s no coincidence our results suffered a bit around then too. We were obviously disappointed to lose the league final, we underperformed and allowed the opposition to dictate the game. We had a couple of shots too that on another day could have made the game more competitive and tighter going into the last couple of minutes.

“We were disappointed to lose that game but it was the first time that we got all players together after Kildare’s season since then our season really has ramped up a couple of gears and we’ve gradually improved. I think we are coming into this game in really good form. Our preparations have been really good and if I was to compare it to this time last year, I think we’ve hugely improved individually as footballers and collectively I think we are in a really good position as a group,” said Glavin. 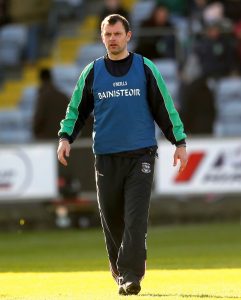 Ross Glavin feels most GAA supporters around the county want his Moorefield team to lose on Sunday but he is hoping to keep the Dermot Bourke Cup in Newbridge
Photo: ©INPHO/James Crombie

After spending almost two years of the team, Glavin feels now that there is a greater understanding from the players of what he wants of them, and vice versa.

“Collectively as a group we have a lot more belief and confidence in the group in what we want to achieve and in what we believe we can achieve. We are in a really good place in that regard and it’s all about putting in a performance on the day. What’s done in the past is something we can’t affect but what we affect is the type of performance we put in for the county final and we believe that if we put in a good performance, our best performance, then we are not going to be beaten in this county final but anything less than that and we could be losing our title,” he said.

Glavin has helped develop a number of young players during his time in charge. The three Marks – Dempsey, Murray and McDermott, Sean Healy and Ian Meehan have all strengthened the team this year but it is Aaron Masterson who has really caught the eye. His manager feels his exploits with the Kildare U20 team proved that he is the best midfielder of his age in the whole country and that is down to his attitude – the kind of attitude that permutates right throughout the whole club.

“Myself, Frank and Kevin, are very privileged to be the management team of Moorefield. There is a very dedicated group of players there and when we came in there was that very talented group of young players crying out for senior championship football. We’ve given them opportunities but they’ve earned them. It’s all well and good getting opportunities but taking them and performing consistently to a very high standard is really what defines how good a sportsman you are. Aaron Masterson is without doubt, in my opinion, the best 20 year old midfielder in Ireland. He has an exceptional attitude but that attitude is replicated throughout many players in that Moorefield senior football panel. The culture is set by the experienced players and they deserve as much credit as the younger players – Daryl Flynn, Kevin Murnaghan, Ronan Sweeney, Liam Callaghan. These guys set the culture for the likes of Sean Healy and Mark Dempsey to come into. The standard is high and the expectation is there for young players to reach that standard every single night at training. There’s a great vibe and atmosphere in Moorefield that has been built up over the last 20 years by the likes of Sos Dowling of driving things on. As a club we are in a great place but that doesn’t mean we are going to be handed a county title on Sunday, we have to earn that title. We have to approach this game as if it is the most important game of our lives and if we put in a performance and play to our maximum ability I’d be fairly confident that we are going to win this game,” said Glavin.