Midfield battle the key to deciding outcome of SFC Final

IT’S only taken 47 games but here we are with the final most would have wanted.

Athy have been the form team throughout the year and look capable of putting up a stern challenge to county and provincial champions Moorefield.

Moorefield, though, have been quietly impressive themselves with Ross Glavin taking full advantage of the depth of panel available to him throughout the championship and building a healthy competition for final places.

We look ahead to three key areas that will help decide the outcome.

You wonder at what point Aaron Masterson’s batteries run out. Despite long campaigns with club and county he has been the outstanding player in this championship. 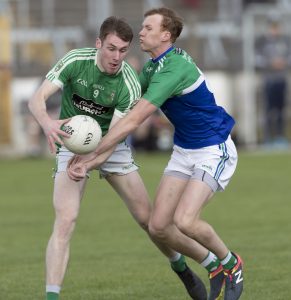 Aaron Masterson has carried the form he showed during Kildare U20s run to All-Ireland glory into the club season
Photo: Sean Brilly

Alongside him, quietly effective, intimidating in his own way, Daryl Flynn remains indispensable to the Moorefield cause. Crucially, thinking back to last year’s final, he’s kept the red mist and red cards at bay too.

Predicting Athy’s midfield is trickier. Paschal Connell will be there and was outstanding in warding off county colleagues Flynn and Conway in the semi-final. With Kevin Feely floating in and out from full-forward, Emmanuel Kennedy went with David Hyland as Connell’s permanent partner against Celbridge and he was superb.

Both Athy midfielders punched fatal holes through Celbridge’s defences and they’ll need a repeat performance. No doubt Feely will augment that sector as he did for long stretches in the semi-final. I’d question his value at full-forward with the suspicion being that he’s not operating at full physical capacity. However, he seemed closer to his best the last day. 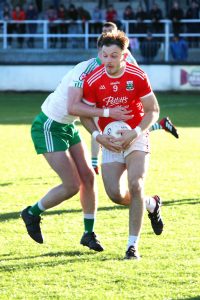 Paschal Connell had one of his best games in an Athy jersey during their semi-final win over Celbridge
Photo : Piotr Kwasnik

One of the features of both semi-final performances was the long-range shooting. Niall Kelly and the under-rated Liam McGovern were on fire, particularly in the first-half when they just couldn’t miss.

A key question will be whether Mark Dempsey is fit enough to take up his natural position marking Kelly, with one of the Healys as the fall-back option. It seems touch-and-go. James Murray may be detailed to track McGovern.

At the other end Adam Tyrell is back at his best and you’d wonder do Athy have the man to curtail him. The full-back line had their struggles against Celbridge. Besides, they’ll have the likes of Hurley-Lynch to look after as well. Nippy subs to come on as well.

EDGE OF THE SQUARE

Ross Glavin’s deployment of Jason Phillips the last day will get Kennedy thinking. His withdrawal for Roli at half-time only adds to the permutations.

Athy struggled somewhat with O’Callaghan’s physicality the last day although Killian Mulhall had his moments too. If Moorefield go with Phillips again then there’s an argument for Athy to bring in Mick Foley to that sector. The former All Star has been used sparingly. Another intriguing option could be Cathal McCarron who was on the bench against Celbridge.

At the other end you’d imagine Feely will at least spend some time close to goal and that puts a big onus on Liam Healy. Healy is a tough competitor but that aerial battle will be a tough one for him.

Unless Moorefield run out of steam, I think they have the better defence, the best current club performer in the county in Masterson and a broader range of attacking options, particularly off the bench. Athy are not without a chance but would need to replicate their almost flawless shooting from the last day. Moorefield by a couple of points for me.

By the Kildare Nationalist’s “Supporter” columnist.