UP TO a thousand residents marched by candlelight on Saturday in memory of a young teenager who was knocked down and killed outside his home in Sallins.

In a moving tribute to the memory of Dane Loakman and in protest at the lack of response on road safety from Kildare County Council, the large gathering marched in silence through the village on Saturday afternoon. Sixteen-year-old Dane Loakman died when he was hit by a van on the busy Clane Road in Sallins in November of last year. The popular teenager from Castlefen estate was crossing the main road to catch the school bus. 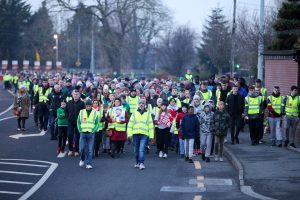 Around a thousand people turned out for the march through Sallins to protest at the county council’s lack of response to road safety concerns in the village
Photo: Piotr Kwasnik

“This was by far the biggest protest ever held in Sallins and the biggest in Kildare for quite some time,” said chairman of the council Fergus Carpenter. “For a place with a population of 6,000 people, a turn out of 1,000 really wasn’t bad.”

Before the march set off, he spoke of the pain that Dane’s family endure and explained that Dane’s mother Alison was fighting for road safety measures so that no other Sallins family would have to go through the same pain.

Alison spoke also. She thanked everyone for taking part in the march and said the support from the community was a real comfort to the family.

“Cars flying down the Sherlockstown and Osberstown Road entering Sallins, past housing estates with children and cyclists, must be slowed down, too. We demand full and proper traffic-calming measures in our village.”