AS somebody who owns and runs his own HR consultancy and recruitment agency, Niall Browne is quite adept at finding and matching the right man with the right job and he has put those skills learned in his day job to use to help guide Two Mile House to Saturday’s Leinster Intermediate Football Final. 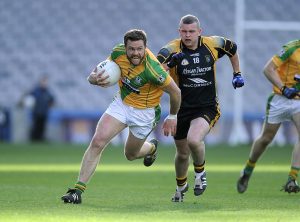 Niall Browne is not quite retired, he played five minutes at the end of the Leinster quarter-final win over Round Towers, but these days he mainly concentrates on leading Two Mile House from the sideline
Photo: ©INPHO/Tommy Grealy

Since taking over as manager of his own club, Browne has quite cleverly added some top class talent to his backroom. His trusty sidekicks, Tadhg O’Neill and Mick Burke, were always going to be involved with him but Browne feels it is the addition of a trio of Cavan men, Kevin Downes, Colin McCabe and Jimmy Higgins that has really helped propel Two Mile House to the next level ahead of Saturday’s final against Shamrocks.

“My job is for Two Mile House to be as successful as possible. I own my own recruitment agency and HR consultancy and it’s all about matching people with companies and getting people with skills and experience into organisations and improving them. It’s the same here and everybody is learning. I’m learning, I’m a far better coach now than I was before we all came together as a management team. If it was just me coaching the lads every night it would get boring very quickly but we have these different voices and that is brilliant,” explained Browne, the man who captain the club to All-Ireland Junior glory early in 2014.

It was through his work that the first contact was made with the highly rated Downes.

“I first spoke to Kevin six, seven years ago, I think Kevin was living in London at the time. I was interviewing him for a job, actually, and as soon as he mentioned football my ears pricked up, and I’d say we ended up talking about work for five minutes and about an hour on football.

“London got to the Connacht Final in 2013 and a huge part of that was Kevin Downes. He came in and developed that London team from nowhere into Connacht finalists. He is from Cavan, he won Cavan titles with Cavan Gaels, he was then involved with Cavan’s senior setup and definitely improved them from an attacking point of view. I would say Kevin has changed us from having the mindset of an intermediate team to having the mindset of a senior team.

“The big thing that Kevin has taught us, and he has educated me, is around the tackle and the kickout. You can see that in how we play, he has been massive for us,” said Browne.

Also, through his work and connections with Downes, Browne was put in touch with Colin McCabe, a goalkeeper who spent time on the books of Celtic, and he has played a big part in improving the club’s goalkeepers.

“Colin rang me one day, through Kevin, for a bit of career advice and I asked him would he be interested in coming down and giving us a dig out with the goalkeeping. Colin was on the books with Celtic up to last year and knows Kevin very well. He has worked with Johnny Goff and Didier Cordonnier. The work he has done blends in a lot with some of the stuff Kevin was doing on the kick out. The two of them have been brilliant,” said Browne.

“We’ve another guy from Cavan, Jimmy Higgins, in the stands for us and he feeds down information. We’re blessed to have them. So we have four guys from the club, Declan Colbert does our stats and he does the stats for Kildare, then we have myself, Tadgh O’Neill and Mick Burke and the three lads from Cavan. We’re blessed to have that group of lads all there for the right reasons, who love the game and who are all bringing different things.

“My job is to facilitate all them and to create an environment where they can all bring their own experiences to bare. The players love working with them. We all love going training, we have great craic and we are all learning off each other,” said Browne.

Clearly that mix of experience on the sideline is benefitting the Two Mile House and they are a side who seem to be getting better with each passing game.

“We’re six or seven months into coaching the boys and them developing their understanding of how we want them to play. When we are in an offensive situation everyone is a little more aware about what everyone else has to do, same in defensive situations. Skill executions are improving, the movement off the ball is improving, all that kind of stuff,” said Browne.

That hard work off the pitch will extend to finding out as much as possible about Saturday’s opponents but already Browne is well aware that his team will have keep danger man Nigel Dunne as quiet as possible. He is confident that his players can do that without losing any of their attacking edge.

“We’ve done a lot of research on Shamrocks and will continue to do so. Ultimately, the game is about winning the middle third, it’s about working harder than the other team and getting more possession than the other team. If you can come out on top of those markers then you are going to negate good forwards on the opposition as well. We’d be confident in our defenders as well, we’ve come up against a lot of good forwards this year and the lads have done well. It’s a brilliant challenge for whoever will pick him up and one or two other players as well. We’ll be selling it as a challenge to the lads and they enjoy that. It’s another step up and another opportunity for one of our lads to develop themselves as a footballer by coming up against a good footballer. We’ll definitely be trying to negate his influence, along the rest as well, and that is what we have been doing all year.

“We can’t get overly concerned about the opposition either because if we do we’ll confuse the players as well. We have our three or four goals on the team and if we hit them and lose, well then we have no problem with it but generally if we hit those we are hard to beat,” said Browne.

Two Mile House are confident that Willie Burke will overcome a hamstring injury and that they will be picking from a full squad and you can be sure that Browne’s backgorund will help him pick the right men for Saturday’s job.