Doolan passes tough examinations – on and off the pitch

THERE is probably no handbook to suggest that the best way to prepare for an important college exam is to play an intense and exhausting football final before racing halfway across the country and sitting that exam in soaking wet football gear but that is how Caomhan Doolan spent last Saturday afternoon. 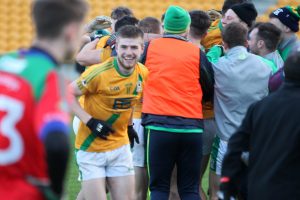 Caomhan Doolan races away from the post match celebrations to begin his trip from Tullamore to University Limerick in time for a Linear Algebra exam
Photo : Piotr Kwasnik

Fresh from a man of the match display as Two Mile House beat Shamrocks to lift a Leinster title by a single point, Doolan stayed for the presentation of the trophy before racing from Tullamore to University Limerick to sit a Linear Algebra exam.

“I was just thrown down straight into a car and booted it straight down and I made it about five minutes late. I did the exam in my football gear, I didn’t have time to change so my socks were still sopping wet,” said Doolan.

It was more of a rush than had been planned because a helicopter had been laid on to get Doolan to Limerick but the dreadful weather conditions meant it couldn’t take off.

“There was talk of it beforehand and before the game Niall (Browne) and Tadhg (O’Neill) told me that it was all good to go. I ran into the dressing room after the game and it was only then that Niall told me that the helicopter couldn’t take off so I was just thrown into the car and got there as quickly as possible,” said Doolan.

His efforts drew praise from his manager Niall Browne.

“Caomhan was magnificent today, he was our best defender. Caomhan has been midfield all year but we had a few injuries so we had to put him back there. Right on the full time whistle, I sprinted off the field with Caomhan. He was supposed to get a helicopter to University Limerick to do an exam but the helicopter couldn’t go because of the weather so my brother was waiting in a car to take him to Limerick. For him to keep his focus today like that was magnificent,” said Browne

The exam lasted an hour and a half and Doolan was able to quickly refocus after such a high of winning a Leinster title.

“It was one of those exams where it didn’t take much understanding, it was stuff you learned and it was just putting that on to the page. In the car on the way down I looked over some stuff and got focused again,” said Doolan.

As a third year Financial Maths student there was no chance that he could have missed the exam.

“I only have exams at Christmas this year, I don’t have summer exams, because I am going working from January to August,” said Doolan.

Thankfully the effort was worthwhile and Doolan was pleased with how the exam went and was able to get a bus back to Kildare later that evening to join in the celebrations.

He didn’t make the Sunday celebrations though as he was back on road to Limerick ahead of more exams this coming week.

“That’s a bit annoying alright. It was the same after the county final, I couldn’t really join in the celebrations because I had assignments due in that week,” he said.

Once he gets these exams out of the way, Doolan may be able to relax and enjoy all he has achieved this season, he certainly deserves it after helping Two Mile House to such a memorable year.