A host of Ireland’s leading novice hurdlers have been included among 44 entries for the Grade 1 Lawlor’s Of Naas Novice Hurdle at Naas on 6 January. 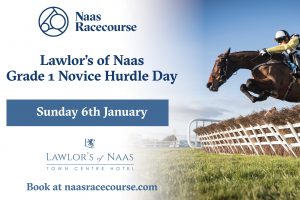 The Grade 1 Punchestown Champion Bumper winner Tornado Flyer is likely to spearhead a strong assault on the race from champion trainer Willie Mullins. Mullins has won the Lawlor’s Of Naas Novice Hurdle three times since it was upgraded to Grade 1 status and he is responsible for 12 of the initial entries for the race which were revealed on Tuesday.

Also among the Mullins entries is the highly regarded Annamix who is yet to make his hurdling debut for the trainer but is already highly placed in the betting for next year’s Cheltenham Festival and Relegate, the Grade 1 Cheltenham Champion Bumper winner who opened her account over hurdles at Naas on Tuesday.

Gordon Elliott won the 2017 renewal of the Lawlor’s Of Naas Novice Hurdle with Death Duty and is keen to target the race again with the unbeaten Battleoverdoyen being aimed at Naas.

Battleoverdoyen made an emphatic start to his hurdling career at Navan last weekend and is on course to step up in class at Naas next month.

“The Lawlor’s Of Naas Novice Hurdle comes at an ideal time of year and all being well that is where Battleoverdoyen will go next,” Elliott said. “We were delighted to get him started over hurdles at Navan last weekend. I felt he improved from his bumper and hopefully he can improve again from his maiden hurdle to Naas.”

“We have entered a good few for the race and we’ll see what happens over Christmas before making any definite plans as to what will run with Battleoverdoyen. There’s a good chance Defi Bleu could go there. He ran a nice race at Navan and is still learning all the time. Commander Of Fleet would also be a possible runner. I was happy with his run in the Royal Bond. We always knew that two miles would be too short for him but he stayed on really well and I’m looking forward to stepping him out in trip again so the Grade 1 at Naas could be an ideal race for him.”

Local trainers Oliver McKiernan and Philip Dempsey have both entered their recent winners Gallant John Joe and Derrinross, while trainer Pat Fahy has pinpointed the Lawlor’s Of Naas Novice Hurdle as the next race for last weekend’s maiden hurdle winner Dunvegan. Naas maiden hurdle winner Rhinestone is part of a strong team of entries for in-form trainer Joseph O’Brien.

Racecourse manager Tom Ryan said: “I think you could be forgiven for thinking that this year’s renewal of the Lawlor’s Of Naas Novice Hurdle could be the most competitive yet. We are delighted with both the quantity and quality of the entries for the race. At a busy time of year in the National Hunt calendar it has been very encouraging to read comments from a lot of trainers planning on heading for the Lawlor’s Of Naas Novice Hurdle and we are counting down to our biggest fixture of the year.”