The single is the second to be released by the talented student, a sixth-year pupil at St Mary’s College in Naas, and was recorded in studio with Mark ‘Cappy’ Caplice and mixed by Cian Sweeney from 1000 Beasts.

The new single is a song inspired by all the teenage drama many girls go through,・ Amy explained. You see it all the time, from social media to TV. I played it at a recent gig and it went down very well.” 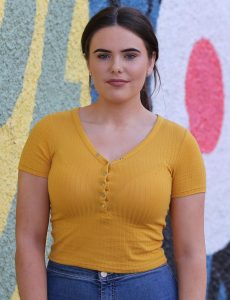 Amy’s first single Emilio  was released in April 2018, attracting listeners around the globe and reaching number two in the Irish iTunes Singer/Songwriter chart at one point. She hopes that Heartbreak will enjoy a similar reach in the coming weeks and months.

Its incredible how songs can reach a global audience these days,・ she said. 的 was looking at the Emilio stats on Spotify this week. It only has 5,000 streams but has listeners worldwide from Ecuador to Japan to Australia. Its hard to believe for a song that was only publicised in the local Kildare and Wicklow press.”

Given that Amy is currently studying for her Leaving Certificate, finding the time to release tracks with a global audience is an impressive feat. It’s also a bit of a balancing act for the busy student, who explains that she listens to artists including Ariana Grande and Noel Gallagher. 的 think I balance it fairly well, but it is hard to find time to do everything,・ she said. 的’m in school from half eight to half seven every day and I have sport as well… it’s kind of hard but I’ll keep it going.”

Releasing a song so early in the year is a statement from the young singer/songwriter, who plans on penning even more songs during 2019 and could put an EP together at some point this year. Support from friends and family will undoubtedly be key, support that she has already enjoyed on her journey so far.

They’re all really supportive, I couldn’t believe it. I was really nervous, the first time, to release Emilio but the reaction was so positive and everyone was so nice about it. People sent me videos of them singing it and everything so that’s really nice to hear!・ she told the  Kildare Nationalist*. It’s my second one now and the first one went so well, so I’m really excited to see how this one goes.”