AFTER five years of division hopping, Kildare begin another league campaign that they hope will end in a change of division on Sunday when Kieran McGeeney’s Armagh are the visitors to St Conleths Park. 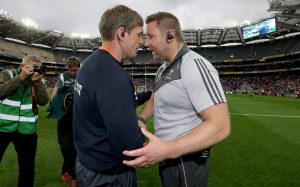 Kildare managers past and present – Cian O’Neill and Kieran McGeeney – will be in opposing dugouts on Sunday
Photo: ©INPHO/Donall Farmer

2014, Jason Ryan’s first year in charge after replacing McGeeney as Kildare manager, was the last time that Kildare consolidated their league status. Since then it has been a rollercoaster ride of relegation all the way down to Division 3, bouncing back to the top flight before last season’s seven successive defeats in Division 1.

As a side relegated from Division 1, Kildare will start the season as one of the favourites for promotion but a cursory glance over the upcoming fixtures suggests this will be tough season.

It’s Armagh’s first season back in Division 2 since their relegation in 2016 but they have already shown with their McKenna Cup displays that they mean business. McGeeney’s return to Newbridge, only the second time that a former manager has returned to Newbridge to manage against Kildare – Micko’s Laois team were beaten in 2005, undoubtedly adds extra spice to the occasion. For some bizarre reason the former All-Ireland winning captain was not universally loved within Kildare during his six year term but there is little doubt that he produced the best Kildare teams, outside the Micko era, in recent memory. All that was missing from his time in charge was a silverware but he came closer than any Kildare manager other than Micko to realising that in modern times.

That should assure of him of a warm welcome to Newbridge but Cian O’Neill has far more pressing concerns than who is in the opposing dugout. Kildare have lost their last nine league games across the last two seasons and need to end that losing streak. O’Neill said last week that his team’s league season won’t be decided on the result of Sunday’s game but the fact is that over the last four years when Kildare have won their first league game they have gone to be promoted, when they have lost it they have gone on to be relegated. Coincidence perhaps but there is no doubt that a good start provides the ideal platform for a good season.

Now, in his fourth year in charge, it has been an off-season of change for O’Neill among his management team – and also in his playing squad.

Karl O’Dwyer and Tom Cribbin, who was a selector when McGeeney managed Kildare’s under 21s to Leinster glory in 2013, form the new management team following the departure of Enda Murphy and Ronan Sweeney, while Galway man Alan Flynn has settled in nicely by all accounts as the team coach.

The overhaul of the playing squad has been no less drastic. Daniel Flynn made a high profile withdrawal from the squad due to personal reasons, as did Johnny Byrne, while Eamonn Callaghan retired after almost two decades distinguished service to the white jersey.

O’Neill will also pick Sunday’s team without the suspended Neil Flynn and Mick O’Grady, the injured Kevin Flynn and it will be a few weeks yet before the Two Mile House contingent of Peter Kelly, Chris Healy and Mark Sherry link up with the squad. Paddy Brophy is also considered a doubt with a hamstring injury and Niall Kelly is travelling.

That all leaves O’Neill with a selection headache but the flipside of that is that he is the first Kildare manager since 1966 to welcome a bunch of Lilywhite All-Ireland winners into the squad. Nine of last year’s successful All-Ireland winning Under 20 team are included on this year’s panel and while O’Neill rightly preaches patience about how quickly they will settle into senior football, some of those are sure to feature on Sunday.

Among them, the most intrigue will surround Jimmy Hyland. The brilliant Ballyteague man was the star among stars on the under 20 team and he featured in five games in Division 1 last year. If he plays, he will certainly receive some close attention from the Armagh defence who will know all about his talents but that is something that he will have to quickly get used to. The way he handles that attention will decide whether he can carry his amazing form from underage form into the senior grade.

Of the other eight under 20s on the panel, only goalkeeper Aaron O’Neill has previously started a league game while Mark Dempsey was a half time substitute in the last game against Galway last year. 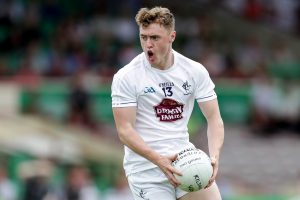 There will be a buzz of excitement over Jimmy Hyland as he progresses from underage football to senior level
Photo: ©INPHO/Laszlo Geczo

Along with Hyland, Moorefield man Dempsey would appear the most likely to feature on Sunday with Mark Barrett, Aaron Masterson, Padraig Nash, Jason Gibbons, Tony Archbold and the youngest of the bunch, DJ Earley also to come to the reckoning.

It’s not just the new faces that have brought a freshness to the squad. Eoghan O’Flaherty, Adam Tyrrell and Ben McCormack all return after absences of varying length and it is likely that all three will start in the forward line.

That all means that it will be a much changed Kildare side that will take to the field on Sunday but the personnel scarcely matters. Armagh showed in the McKenna Cup final last week the kind of aggression that they will bring to the game and whoever is in a white jersey on Sunday will need to be ready for that and be able to stand up to it and if they do that they will give themselves a good chance to walk away the first points of the season.