IF your office is anything like the one here in the Kildare Nationalist you will have been able to pick out those who stayed up late last Sunday week to watch the Superbowl between the New England Patriots and the Los Angelus Rams. The bleary, red eyes were an easy giveaway for that but what you might not know is that we have our very own American Football team on our doorstep here in Kildare. 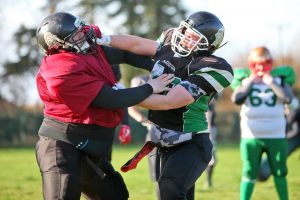 The Cill Crusaders were formed two years ago when two teams came together, the  South Kildare Soliders and the North Kildare Reapers, and they represent the county in the IAFL 2. Teams with names like the Causeway Giants, North Dublin Pirates, Meath Bulldogs, Antrim Jets and NI Razorbacks will be the opponents for the Kildare team this year and their hopes are high with a knowledgeable man in charge.

Head Coach Ken Farrell has been involved with American Football teams for most of his life and he lives for the sport.

“I’ve been involved in football for a long time. I started with a team called Dublin Dragons in the 1990s and it was a great team, I loved it. At that time, there was a split and they were going to form two teams and I decided that if they were going to split I was going to form my own team near my own home. We formed a team called Edenderry Soliders and played out of Edenderry RFC,” said Farrell.

His winding American Football career brought him to the South Kildare Soldiers and they had a nomadic experience until linking up with the Reapers.

“We trained on Kildare Town’s soccer pitch for a while and they were very good to us but there were clashes with their matches so we moved on to Cill Dara RFC for a while. Then we joined with the North Kildare Repears to form the Cill Dara Crusaders. We were based in Naas last year but we had to move again and we are based in Newbridge College this year and it’s working really well so far, they have looked after us very well,” said Farrell.

“There is no downtime for a coach. You could be driving along in the car and have to pull in to scribble down something you think might work. You’re always thinking about what player you might use to make a play work. It’s constant, you go to bed thinking about it and wake up in the morning thinking about it and at the same time you are trying to juggle life and everything that goes with it. People say it’s a passion or a hobby but it’s more than that because you have to live it,” he said.

It helps that his son Jordan is one of three quarterbacks for the team.

“I played GAA and soccer all my life but my old boy is the coach so I started going more to this training because he was the lift. I ended up getting a love for it and I am playing flat out now since I was 16,” said Jordan.

The quarterback is the most pressurised position on the field and from there, Farrell dictates exactly how the team will progress down the field.

“I have to talk the whole way through, plan everything, tell everyone what to do, sometimes you might only have 25 seconds to tell those other ten lads exactly what to do and get everyone lined up. Getting them to do as they are told is a job in itself, never mind throwing the ball.

“I do my homework, I study every night going over plays. I design my own plays too sometimes and send them in and I get told they are not good so I go away and design another one until I get one we can use,” laughed Farrell. 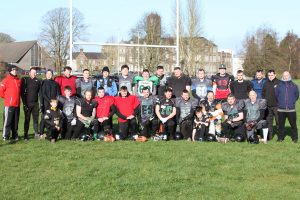 The Cill Dara Crusaders are always looking for new players and for those thinking of giving the sport a go, Farrell’s advice is simple.

One of those who said he would try it out was Mark Lennon, who had never played any previous sports.

“I wasn’t actually a big fan of the sport, I’m not really a big sports fan at all myself but a mate of mine was on the team and he kept twisting my arm until I came down and gave it a go. Low and behold, I fell in love with it and here I am three years later, I can’t get enough,” said Lennon.

It’s the camaraderie among his own team, and opponents, that attracted Lennon to the sport.

“In our regular season we play eight games and then there is the post-season. Four of those at home and four away, two of those a long distance away, in Northern Ireland. The teams are evenly spread around the country, there area teams in Galway, Limerick, Cork, Belfast, plenty around Dublin too.

“It’s a fairly supportive bunch and you would see lads who moved away popping up on other teams and things like that. It’s very much a loving vibe about the sport, everybody is happy to see the sport getting bigger.

“I think the great thing about football, and it’s something that I don’t think a lot of people understand, you don’t have to be a great big dude to play. No matter what build or height or weight you are there is a spot that will suit you on the team. In my case of not knowing anything about the game when I turned up it was just a case of the coaches trying me in a few different places before finding me a spot. I ended up in the offensive and defensive line,” said Lennon.

Last year, the Cill Dara Crusaders won two and lost six of their matches and will hope to improve again this season. They are always looking for new players and train on the pitch in Newbridge College on Sunday mornings. Their first game of the season is a home game against the Causeway Giants on Sunday 24 March at 1pm in Newbridge. Get along to try it out!