SERVING councillor Ivan Keatley and Athy woman Ciara O’Keeffe have been chosen to run as Fine Gael’s candidates for the Athy Local Electoral Area in the local elections this May.

The nominations were made at a selection convention on Thursday 21 February at the Clanard Court Hotel in Athy, which was attended by former party leader Alan Dukes. Speaking to the  Kildare Nationalist Fine Gael’s TD for Kildare South Martin Heydon explained that they have a well-balanced team for the upcoming elections.

“I’m very excited,” he said. “We had a very positive convention last Thursday night and we have a really strong team in Cllr Ivan Keatley and Ciara O’Keeffe.”Cllr Keatley, who was first co-opted to take Deputy Heydon’s seat following the 2011 election, explained that while the reduced number of seats in the electoral area will be a challenge, he is looking forward to the campaign that lies ahead. “[I am] really looking forward to the campaign and getting back to the doorsteps and to listen to people’s concerns and issues,” he said.

He also said that his selection is a “big honour” and thanked Fine Gael for having faith in him to run for election in May. “I’m delighted to be selected alongside Ciara as well, who is a really strong advocate for Athy town, and I’m looking forward to it being one big team effort.” 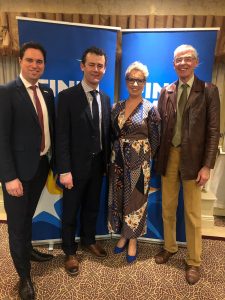 Ms O’Keeffe, who described herself as born and bred in Athy, has spoken about her passion for her hometown and explained that she feels it is time for her to give something back. Her focus is undoubtedly on accentuating the positive and she highlighted a range of positives in the town including substantial government investment, Athy’s development as a hub for sports, initiatives to make use of the River Barrow as an amenity, the impending Primary Care Centre and, of course, the fact that the ring road project has finally begun after decades of discussion.

“I really have this vision for Athy that we can be a really positive place to live,” she said. “I’m just all about being positive for Athy, I’m fed up of people being negative. I think we have too much to give and too much to offer and I think that we need to… make sure that the positivity gets out there.”

And, despite being new to the world of politics, the Fine Gael candidate is looking forward to hitting the campaign trail, meeting people, hearing about their concerns and convincing them that she can be a voice for the district. “I can’t wait, to be honest with you,” she said. “I’m looking forward to the reception.”