ACCORDING to most respected boxing pundits around the world, Mexican Jaime Munguia is a highly rated, up and coming fighter who could go on to do great things.

At just 22, he is undefeated after 32 professional fights and already holds a world title.

All very impressive but he’s just another name to Dennis Hogan, another hurdle to clear on the way to what he believes is his destiny, to be world champion. 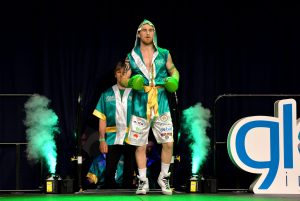 “Some people have taken the liberty of their own free time to come on to social media to tell me I am going to lose. I don’t get involved and to be honest I don’t blame them because if you were to look on paper it would look like he is by far the dominant fighter. It is what it is and it causes for a bigger upset. I am supremely confident,” said Hogan.

Never less than respectful, Hogan is not downplaying the size of the task ahead of him when he takes on Munguia in his backyard in the Monterrey Arena on 13 April, it’s just that he is totally confident in what he is going to do.

Now 34, Hogan has had to fight for everything he has and he isn’t going to stop now.

“I am going to go over there and snatch that belt. I will do whatever it takes on the day. I have a lot more experience. He is 22 years of age, how much experience has he got? His power has got him to where he is but somebody like me is going to cause him problems. I am not going to be coming in one dimensionally like his last opponent. I am going to cause a big upset and I know that, I absolutely know that. We’ll have neutral judges, officials and all of that,” said Hogan.

Even to be stepping into the ring for a world title shot is remarkable for the man who used to box out of the Grangecon club as an amateur. Nobody gave him a chance of being in this position when he left Ireland for Australia almost a decade ago but all Hogan has ever wanted was a chance.

He was given his breakthrough in small Australian halls and gradually made his name as he collected belts around the country and continent. He has been on the brink of this world title shot for a couple of years now and negotiations proved especially difficult with Oscar De La Hoya and Munguia camp since his last win over Jamie Weetch made him a mandatory opponent.

“It was a little bit stressful because nothing was as it seemed. We were being offered certain things and then it was changing. Some people weren’t co-operating and through the whole time it was a little frustrating, there was the feeling that these guys were out to play a few games. It was stressful but the whole way through I just kept training and doing what I needed to do because at the very worst I knew I would be fighting in Mexico on 13 April. We chatted about that in the gym and I knew I had to get the work in. Once I was focussed in there was no problem in being ready to peak on time,” said Hogan.

His team have ensured the biggest payday of his career but money has never been the motivating factor for Hogan.

“Even though I know I am about to get the biggest lump sum of my life which could make a big difference it just doesn’t enter my head in any way, it just doesn’t excite me in any way. I’ll tell you what does excite me, that feeling of lifting that belt. That feeling comes over me now and then and I’m only a few weeks away from realising that feeling. That dream and vision doesn’t get any bigger now that I am here, I’ve been carrying that dream and vision all the way along,” he said.

He is currently hard at work in his training camp.

“It’s full on at the moment, I’m up to sparring ten rounds last week and all the rest that goes with it. It was intense because it was 37, 38 degrees on Brisbane. To get over a week like that is good, getting all my conditioning and strength work done. I always keep fit, they have obviously tried to catch us out and threw us a bit of a curve ball but they didn’t count on me being fit already. It’s a quick jump which is always harder on the body but it’s something that I can do, and do well and be very ready for this fight,” said Hogan.

Hogan came to Los Angeles last week to take the training camp to the next level.

“We all came to LA last Friday – me, my coach, my padsman, my strength and conditioning coach, the guy who does my meals for me. We’ll have about two and a half weeks here, I’ll be well acclimatised after. We’ve sourced some good sparring around the area so I am quite happy about how that will work out.

“We’ll head to Monterrey on the Tuesday before the fight. On the Wednesday there is a public work out, press conference Thursday, weigh in Friday and then fight Saturday,” said Hogan.

There was talk of the fight possibly being in Australia, or even Las Vegas, where Hogan would have been assured of a sizeable support. ‘The Hurricane’ won’t have quite the numbers behind him in Monterrey as he would have had in those venues but he is confident those who do travel will make themselves heard. He is especially delighted that his partner Brideen and young daughter Aria will be there, along with his mother who will fly from Ireland for the bout.

“It feels like a fairly good Irish contingent coming over and if you have that bit of vocal support it makes a difference. When I fought Jack Culcay in Germany there was only five or six there from Kilcullen and a couple others. He had all his crew around the ring and I knew if I landed a shot there wasn’t anything to be heard, he just had to move his shoulder to get a scream. I reckon I’ll have a good, vocal support there and I believe I’ll get a fair decision if it goes that far,” said Hogan. 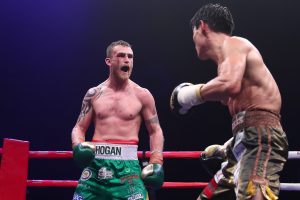 Already there are talks of what could be when Hogan becomes champion and Cork’s Gary ‘Spike’ O’Sullivan could make an appearnance at ringside in an attempt to hype what could be a dream homecoming bout to the defend the title in the 3 Arena.

“I’m always looking at the bigger picture, I never look past anybody or never get complacent, but I’m also excited about fulfilling my goal which was always to defend my title in the 3 Arena. I believe those things are only around the corner and I can feel it.

“Apparently Spike will be there, and how good would that be? That would be more history, two Irish guys have never fought each other for a legit world title before. How cool would that be in the 3 Arena? You can’t ask for better than that. I hope Spike does come over and make a fuss because he is really good at selling a fight,” said Hogan.

The fact that the fight is in Mexico means that not everybody who would like to be there can make the fight but Hogan is very active on social media and says that the support from home, as well as from his adopted country of Australia, is what drives him on. 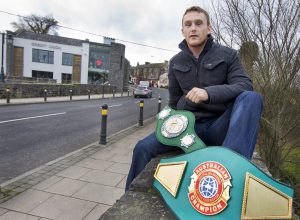 Hogan pictured in his home town of Kilcullen in 2014, he hopes to returning there with a world title in a few short weeks
Photo: Piotr Kwasnik

“I’m always grateful for the support. Ireland, and especially the people in Kilcullen, have been a major inspiration for me throughout my career. I look forward to giving back and lifting that world title and then coming back to celebrate in style a few days later. Enjoy the fight and have nothing but absolute faith that I will win that title and bring it back,” said Hogan, when addressing his supporters.

What a party there will be in Kilcullen if Hogan can pull off this upset.