Cully in a hurry to collect some belts

SARTO southpaw Gary Cully is a man in a hurry. He desperately wants to start collecting professional titles and has targeted the Irish lightweight title but he has warned other lightweights around the country that he won’t hang around forever. 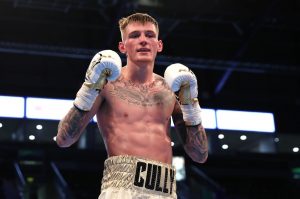 Cully was disappointed that a title fight was made between Feargal McCrory and Karl Kelly last month and even more so when McCrory won that bout and then vacated the title.

“I said all along that the champion would move back down to super featherweight. The fight shouldn’t really have been made, it’s a bit of shambles really that he won that title and then vacated it after I put pressure on the BUI to order a fight. If the titles are going to be in play then they are going to have to start making mandatories.

“Karl would have probably have defended it against me but Feargal won that so we’ll have to see if the fight can be against somebody else.  If it can be made, it can be made but I don’t see anybody in the rankings that might step forward. I’ve been vocal that I want that fight and I want that belt so if somebody else wants that challenge they can step forward but I’m not going to wait around for it. I’m not going to focus all my career on winning an Irish title, I know there are bigger and better things for me, if we can’t line it up we’ll just move on,” said Cully.

“I wanted to use this year to clear out the domestic scene and prove to myself and everybody else that I am the best in the country. If I can’t get those domestic fights then I am just going to have to take a bigger step up. I think I am ready, it’s just a bigger step up to a European ranking belt, a WBO or IBF continental, something along those lines. That’s probably a bigger step than the Irish title but I might have to do that before the end of the year,” he added.

The Naas man makes his first appearance of the year on Friday night in Belfast and he’s hoping to build on a good 2018.

“I was happy with how last year played out in the end. I was obviously looking for a title but when we sat down to review the year I was happy with how it went. The level of opposition stepped up each time so it was progressing as I would have liked it to progress. It would have been nice to get a belt but they will come in time,” said Cully.

After a busy year, he took some time out after his last fight but has been working hard alongside sparring partner Luke Keeler since returning to the gym.

“I fought on 7 December and took probably my longest break in a long time, it was 2 January before I was back in the gym. I probably needed that just to recharge my batteries. I needed that time to switch off and relax but since I’ve been back in the gym I’ve been working as hard as ever and I’m looking for big fights to come,” said Cully.

Cully’s ambitions for his future career know no bounds and as soon as Friday’s fight is out of the way, he will be looking for a quick return to the ring.

“We were chasing a title fight for this Friday but it’s just a six rounder to get my year started. Hopefully no cuts or bruises and I’ll take a week off and then straight back into it. I’ve no shows confirmed but hopefully I’ll be out again in early to mid May,” said Cully.

This is another Kildare fighter who looks sure to have a title around his waist sooner rather than later.