IRISH Derby winner Latrobe heads the field of 9 runners in the feature Group 3 Alleged Stakes at Naas Racecourse this Saturday. Latrobe’s trainer, Joseph O’Brien has been pleased with the 4 year olds progress this spring. 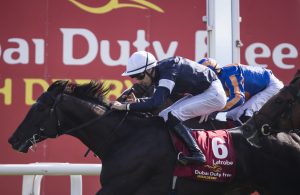 “He looks good and we are very happy with how he has wintered. He is a great horse to have in the yard and we are looking forward to getting him started at Naas. The aim will be in to win a Group 1 race with him this season. He is a huge big horse and he only ran once as a two-year-old so we’ve always hoped that he would make into a real nice four-year-old. Maybe later in the year he could end up heading for a Caulfield Cup or a Melbourne Cup or something like that in the second half of the season.” Commented Joseph O’Brien.

“I’m happy to start Le Brivido in the Gladness Stakes this weekend. It will be his first run for us since we got him in the winter. We thought this would be a nice race to start him in with a view to see would we go for a race like the Lockinge later in the season.” Aidan O’Brien.

The $750,000 purchase Monarch of Egypt is the first crop of Triple Crown Winner American Pharaoh to take to the track and begin his career in the Irish Stallion Farms EBF Race.

Trainer Aidan O’Brien said “He will be our first two-year-old runner of the season and being by American Pharaoh it is very exciting. He has been pleasing us at home and we’re looking forward to getting him started on Saturday.”

There will be plenty of horses off the track also as Naas Racecourse will host ‘under stARTers orders’, a unique public arts display and fundraising initiative. Under stARTers orders have tasked 21 of Ireland’s top equine artists to each paint their own unique version of a life-sized resin fibreglass horse sculpture. The project was established to celebrate the redevelopment of the iconic Curragh Racecourse and aims to raise much-needed funds for Kildare based charities, Irish Injured Jockeys and Sensational Kids.

Tom Ryan Manager of Naas Racecourse said “We are delighted to host under stARTers orders on Saturday 13th April and support two fantastic local charities, The Irish Injured Jockeys Fund and Sensational Kids. We are very excited to see all 21 unique life – sized horses here at Naas in the enclosure area. We encourage you to come see a trio of classic horses on the track and fabulous horses on display off the track.”

The first of eight races will go to post at 1.50pm. Admission tickets are just €15 or hospitality packages are available to purchase at www.naasracecourse.com.