ALTHOUGH it hasn’t been on public display in Kilcullen since the late 1990s, the mummified right arm of the pugilist Dan Donnelly still draws people to the town. It is the tangible legacy of an iconic man who lived a short but turbulent life and left a very strong story behind.

“I’m always surprised that the story hasn’t been made into a film,” says Sean Donnelly from York in England, who is writing a screenplay about his namesake as part of a course at that city’s St John University.

Indeed, Dan Donnelly’s story has all the ingredients for a successful movie — a youngster growing up in a tough and poverty-stricken part of Dublin, later fighting his way to fame and fortune. Losing all and winning it again, only to finally die virtually penniless.

“Next year is the 200th anniversary of his death,” Sean Donnelly noted as he perused an album of articles about the famed fighter which are in the possession of the Byrne family, who have owned the arm since 1953. That was the year of the first Donnelly’s Hollow recreation of Dan’s most famous fight in his homeland, at what is now known as Donnelly’s Hollow.

Sean Donnelly spent much of his life working in Asia and in Africa. Now retired, he has returned to education as a mature student and became fascinated with the Dan Donnelly story. “I’m doing a Masters in Fine Arts in Creative Writing, and this project is part of the course.” 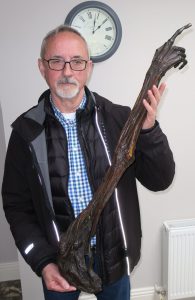 Sean Donnelly gets to see Donnelly’s Arm for the first time since the late 1950s.

He is aware that many stories of the 19th century Irish fighting champion are probably part-myth, and reckons that the pugilist’s biographer, Pat Myler, has best sorted out the fact from the fiction. The author’s original book, ‘Regency Rogue’, was updated and republished some years ago as ‘Dan Donnelly, 1788-1820, Pugilist, Publican, Playboy’

Sean’s recollection of seeing the mummified right arm as a boy during the late 1950s is probably at least part of his interest. His mother’s people came from Ballyhale in Co Kilkenny, and as a child he would be sent back there as a break from growing up in an industrial city. “I especially remember the freedom we used to have in the country, which was very different from where I was brought up. I first saw the arm in The Hideout pub on one of those early trips.”

The arm was a key element of an eclectic collection of memorabilia in The Hideout, from 1953 until the pub was sold in 1996 when the late Des Byrne retired from the business. In 2006 it was the centrepiece of a ‘Fighting Irishmen’ boxers exhibition put on in New York, which subsequently travelled to Boston, the Ulster Folk Museum, Croke Park, and the University of Limerick. The exhibition is currently dismantled and the arm is ‘resting’.

“It’s fantastic to see it again,” Sean Donnelly said last week when a viewing by appointment was made possible in Kilcullen, the result of enquiries by a cousin living in Calverstown, whom he was visiting. He also heard from the Byrne family about other Dan Donnelly family connections, including descendants of siblings of the fighter who had gone to live in Co Louth and to the US. He was also given details of a family in Florida descended from Captain Kelly of Brownstown, Donnelly’s trainer.

The visit has encouraged him to work on completing his screenplay. “It’s a film that should be made, and it should be made in Ireland.” He also suggested that if any local group was interested in doing a stage adaptation for the bicentenary of the fighter’s death in 2020, he’d be interested in helping out.