THE Naas Easter parade took full advantage of the blissful conditions on Sunday and enjoyed “the biggest crowd we had in seven or eight years”, according to chief organiser cllr Deborah Callaghan. 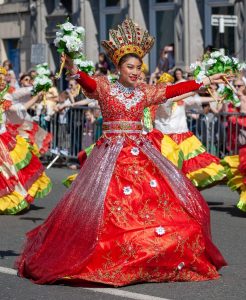 “It was absolutely fantastic,” she said of the glorious conditions. “People even had deckchairs out! There was a real festival feel about it.”

The honour of parade marshal went to double Special Olympic-medallist Conor Byrne, who was presented with a plaque at the viewing platform to mark his achievement last month in Abu Dhabi.

“Vinny Walsh (the MC) did a fantastic job,” said cllr Callaghan, who again marvelled at the balmy conditions. “Usually the dignitaries are in their hats and scarves, but this year they had their sunglasses on!”

The viewing platform was also joined by the mayor of Dillingem – Naas’s twin town in Germany – Herr Franz Kunz, who travelled with his family and deputy mayor to enjoy the 40th iteration of this seasonal tradition.

Lieutenant Neil Richardson led the defence forces’ colour party and he was followed by 29 floats that took all of an hour and a quarter to pass the reviewing platform.

The Naas Men’s Shed won the overall prize for best float, with Dross Evolution picking up the special theme prize for its take on the ‘climate change’ theme of the parade.