A PARTY of 24 children – aged 11 – together with five adults and teachers from our twin town of Grandvilliers in France visited Athy on Wednesday 24 April.

Their first stop was the fire station where they were given a history of the fire service in Athy by Assistant Station Officer Claire Germaine and firefighter Gavin Dunphy. This was highly entertaining for the children as they dressed up in the uniforms, tried the breathing apparatus and used the fire hoses. They were also shown the various pieces of equipment used by the fire service including power saws which are used to cut open cars involved in accidents.

Local historian Clem Roche then took the group on an historical walking tour of the town, finishing at the parish church.

From here they walked to Scoil Phádraig Naofa where Principal Willie O’Gorman greeted the children and proudly showed the facilities available to the children attending the school. They were very impressed with the Special Needs Unit and the sensory room. Unfortunately they were not able to meet with their pen pals in the school as they were on their Easter holidays. Promises were made that they would visit another time during school term. 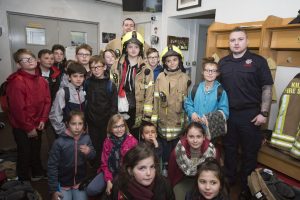 Mr O’Gorman hosted lunch for the adults and children and local traditional musicians Rob Chanders and Joe Byrne played some tunes and showed the children the various instruments. Some of the children played the instruments.

Next up was a tour of the heritage museum – thankfully a bus had been arranged to take them as the rain came down as we were leaving the school. Margaret Walsh arranged a tour of the museum and held a quiz based on the exhibits. All of the children were given certificates by Margaret together with some chocolate cakes which were really appreciated.

Finally, they were brought to O’Brien’s grocery and pub where owner Judith gave them a brief history of this old-style establishment.

After a very tiring but enjoyable day they drove down to Kilkenny to complete their trip to Ireland.

The Twinning Committee would like to thank the fire service, Clem Roche of the Historical Society, Willie O’Gorman and the board of Scoil Phádraig Naofa, Margaret Walsh of the Heritage Centre, Judith O’Brien and local musicians Rob Chanders and Joe Byrne for making the day so enjoyable and informative for our friends from Grandvilliers. We look forward to further trips when hopefully they can meet with their pen pals in the school.