MEMBERS of Athy’s Aontas Ogra youth club have returned from their annual trip to the beautiful Inis Oírr.

On Tuesday 23 April, 21 members of the group set off at 6am, stopping for breakfast at Spiddal and arriving on the island at midday in what was described as “glorious” weather. The fantastic conditions lasted for the next three days and allowed the group a chance to enjoy and explore the island, visiting sights including the Plassey wreck (as seen on the opening credits of  Father Ted ) and enjoying swims in the sea and craic on the beach. Club members Grace and Anna also organised a treasure hunt on Wednesday and there was plenty of fun and conversation in the evenings.

Unfortunately, the trip was cut a little short thanks to the approach of Storm Hannah – on Thursday evening many of the ferries began to cancel their Friday sailings. The group decided to leave the island early on Friday for the mainland, and arrived home earlier than expected on Friday evening. 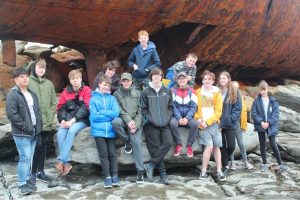 “We got out on the last ferry from Inis Oírr,” explained Aontas Ogra’s Billy Browne, adding that the young members thoroughly enjoyed their trip. “They always do, at that particular venue. There’s something magic about it… they absolutely love it there, it’s their island… they’re talking about next year already.”

Club members have been visiting the Aran Islands annually for the last 25 years or so, with 15 of those trips taken to Inis Oírr which has become their favourite venue. Billy explained that phones disappear during the trip, with a chance for the youths to talk and have fun together. The socialising that goes on within the group is a highlight, he said, a valuable aspect with benefits that can be seen on club nights and other get-togethers which take place afterwards.

“People might say you’re mad, you know, going over there to a little rock in the Atlantic… but it’s an extension of club life and, actually, the most valuable part of the whole thing is the interaction between the young people that go and the way they socialise and have fun together. But they learn things together as well,” Billy said. “You’d be surprised [at] the difference it makes.”

New members are always welcome to join, but the club has highlighted its issues with securing leaders, particularly female leaders. According to Billy, things have changed in that previously leaders would grow through the ranks of the club as members and then step up. They’re asking for parents to get involved and lend a hand.

“We’re struggling to get enough leaders,” Billy remarked. “We can take on some more members at the moment, but at some stage we’ll probably have to say no because we have to have a ratio of leaders per group of young people.”