AN Athy woman who was told she had become legally blind after a rapid deterioration of her sight has urged people to support Irish Guide Dogs for the Blind.

Speaking to the  Kildare Nationalist  ahead of national Guide Dog Day which is on this Friday 10 May, Kim Murphy explained that what happened to her sight was an unusual situation due to side effects from medication she was on.

“Up till four years ago in July I was carrying on with perfect eyesight like everybody else in the world, and then unfortunately – very quickly – my sight deteriorated rapidly over the space of a few days,” she said. “So I went from doing all your normal things to plunged into a world of fog basically.”

Despite seeking medical help Kim was told that nothing could be done, and within two or three months she was found to be legally blind. The shock was understandable and her confidence was left in tatters. She said that the main thing that hit her initially was “pure sadness of not being able to see things” alongside feelings of total isolation. Some people didn’t know how to deal with her or what to say; suddenly an active person who had been living life as normal was walking around with a white cane with assistance from her husband or friends.

Unfortunately, Kim’s cane didn’t provide the freedom it brings for others – she explained that it didn’t suit her environment in the countryside outside Athy and she felt almost trapped in her own home. 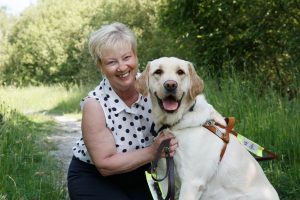 “Within six months of losing my sight, I was definitely thinking ‘Oh no, I need a guide dog’,” she said, noting that she had fundraised for guide dogs in the UK as a child and was somewhat aware of what they do. “So I started the application process for that. And right now I’m flying it with my boy Jango!”

Jango is a cross between a labrador and a retriever, who has his own Instagram account with more than 500 followers, and the pair first met in July 2017. Kim explained that not only are you assessed on whether you’re suitable for a guide dog but you also need the right animal for your circumstances – Jango is classed as a country guide dog. Once he finished his lengthy training (which includes coping with heavy traffic, learning to cross roads and stop at kerbs, and avoiding obstacles that could cause issues for their owner), Kim was trained to work with him in November 2017. “I’ve had him about 16/17 months now,” she said.

Jango has changed Kim’s life. She described the impact he has made as “amazing” and said that often it’s the simple things – walking down a road without bumping into things or feeling for obstacles, or finding a seat in a crowded restaurant or train station.

“He can do all sorts of things, you know. People probably aren’t aware of exactly what guide dogs do for their owners,” she said. “But I mean he is with me 24/7, we are never ever apart. And his mission in life is to keep me safe… he keeps me sane as well!”

Alongside increasing her mobility, Kim’s confidence has been given a fantastic boost thanks to her canine companion.

“You not only lose your independence but you do lose your confidence as well,” she said of the circumstances she found herself in. “Even the first time I was able to go out with him and… just buy something in the supermarket and just stand in a supermarket queue and my dog could tell me when to move on and when to wait because there’s somebody in front, and when to hand the stuff to the lady at the counter or whatever. Just simple things like that that you take for granted when you’ve got your sight… I can do all those things again.”

On foot of her experiences, Kim has urged people across Kildare to support Irish Guide Dogs for the Blind on 10 May or to volunteer to take part in fundraising in the future, highlighting the specialised nature of what they provide. According to the organisation, more than 85% of its income comes from voluntary donations and fundraising through a network of volunteers.

“People like me wouldn’t have a guide dog without that,” she said of the public’s support across the board. “That’s really important.”

To learn more about the organisation or how you can help, visit guidedogs.ie.