Made of Athy project gets president’s seal of approval

CROWDS descended on Athy last Thursday for President Michael D Higgins’ visit to the town as part of the Made of Athy project.

The President unveiled a plaque in honour of the late Leonard Cohen at the Community Arts Centre on Woodstock Street. During a moving ceremony he described the Canadian’s work as having explored spirituality, politics, social justice, isolation and romantic relationships, and said that the plaque is a fitting tribute to the man.

“I want to congratulate Colm Walsh and the team behind [the] Made of Athy initiative,” the President said. “The project celebrates the sense of place in the town, the sense of community and as many of the recipients of the award will have said as the plaques were unveiled, a sense of belonging.” 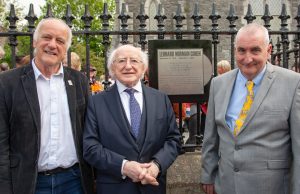 The event recognised Cohen’s collaboration with Kildare writer John MacKenna on the script for a requiem featuring his songs, words and poems, which was later rehearsed at the Athy centre.

Mr MacKenna described the requiem as the result of a number of leaps of faith on the part of Cohen and others, and it premiered at Carlow’s George Bernard Shaw Theatre in 2017 with President Higgins among those in the audience.

“For all of those leaps of faith I am really, really grateful,” he said. “I am so grateful to Colm Walsh – the fact that he recognised what was happening here and that Leonard has been included.”